A High Court judge has said he will refuse to allow alleged domestic abusers to cross examine their victims in any future hearings he oversees.

Mr Justice Hayden said he found it 'extremely disturbing’ that a father appearing in person was able to question his former partner and mother to their 11-year-old son. The father was said to have threatened to kill his wife and prone to violent outbursts of temper in which he would frequently slap and push her. 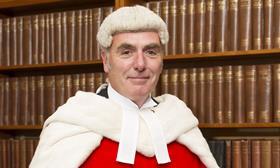 Nevertheless, Hayden said it was necessary to allow the father to conduct cross examination of the mother directly. She was not present in the courtroom but cross examined by video link: the judge granted her permission to sit with her back to the video screen.

The judge said the mother, whom he described as articulate, educated and highly motivated to provide a decent life for herself and her son, faced an 'invidious choice' to submit to personal cross examination to order for the case to be concluded.

Despite efforts to ease her predicament, Hayden said nothing had masked the impact of the ordeal of the cross examination, and she looked at times 'exhausted and extremely distressed'.

He added: 'It is a stain on the reputation of our family justice system that a judge can still not prevent a victim being cross examined by an alleged perpetrator. This may not have been the worst or most extreme example but it serves only to underscore that the process is inherently and profoundly unfair. I would go further it is, in itself, abusive.

'For my part, I am simply not prepared to hear a case in this way again. I cannot regard it as consistent with my judicial oath and my responsibility to ensure fairness between the parties.'

Hayden noted that calls to end cross examination of abused witnesses have been made for more than a decade, and he stressed that any disagreement to the notion was 'redundant of any coherent contrary argument'.

The judgment itself was an analysis of preliminary legal and jurisdictional issues regarding the father's application for a return order for rehearing. Hayden said the father might have much to offer his son if he was able to address some of the violence issues, and CAFCASS had indicated a willingness to help both parents by making a referral for a child contact intervention. The judge hoped this suggestion would be pursued.