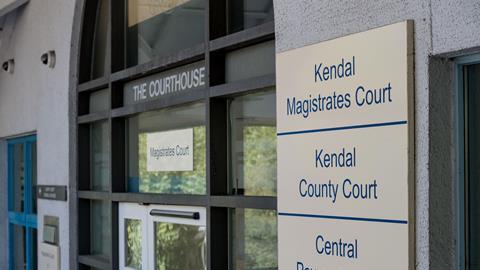 Efforts to secure sufficient criminal legal aid provision for a market town in Cumbria by rearranging duty solicitor boundaries have highlighted a potential self-induced headache for the government as it presses ahead with planned court closures across the country.

The Legal Aid Agency has begun consulting on proposals to merge the Kendal and Barrow-in-Furness duty solicitor schemes as a result of declining provider numbers in Kendal and the forthcoming closure of Kendal Magistrates’ Court.

Providing two options, the agency says it would prefer to maintain the police station rota for Kendal police station, and allocate slots among all members of the scheme, but allow scheme members to elect not to be included in the rota.

'Any decision to allow scheme members to elect not to be included on the rota would be dependent upon a minimum number of members remaining included to provide coverage at a manageable level,’ the agency says.

The court duty solicitor rota for Kendal Magistrates’ Court would be maintained until it closes. Thereafter, the rota will change to a ‘call-in’ arrangement for the alternative court location 'to reflect the envisaged very low number of matters’.

However, solicitors predict that challenges could arise due to the Lake District's geography and lack of public transport.

The consultation has baffled solicitor David Mainwaring, partner at Lancaster and Kendal firm Holdens Solicitors, who thinks the duty solicitor schemes for Kendal and Lancaster should be combined.

Holdens Solicitors is one of two firms that is on the duty scheme for Kendal. Both firms have offices in Lancaster. Travelling to Barrow on the train would require changing trains at Lancaster.

Holdens will not be a member of the duty solicitor scheme from next month due to a change in the office criteria under the new criminal legal aid contracts that commence on 1 April.

If the magistrates’ court did not close, Kavanagh believes it would lead to a resurgence of solicitors focusing on legal aid work in Kendal who would not face travel and profitability issues.

Mainwaring told the Gazette that, if the court had not been earmarked for closure, his firm would have bid for a new legal aid contract, even if it meant sharing resources with another firm.

Kavanagh has long campaigned for Kendal Magistrates’ Court to remain open. She acknowledged that the court needs to be modernised, but said it had excellent access links for all parties including victims and witnesses, and was the only court in Cumbria with disabled access.