The government has been urged to remove ‘blind spots’ in the Domestic Abuse Bill that could deter migrant women from reporting domestic abuse to the police for fear of being deported or enable perpetrators to control their victims.

Members of the House of Lords want to introduce an amendment in the bill that would prevent police from sharing personal data about domestic abuse victims with the Home Office for immigration control purposes.

Explaining the amendment in the Lords on Monday, Baroness Meacher said: ‘Migrant women with insecure immigration status are, in my view very understandably, reluctant to report domestic abuse to the statutory services. Would you, one might ask, particularly to the police? This reluctance is due to the current data-sharing agreements between statutory services, including the police and the Home Office, for immigration control purposes. This means that women affected cannot seek support or a safe place to go, with the most appalling consequences, as one can very easily imagine. Perpetrators are not being brought to justice.’

The Lord Bishop of London said freedom of information requests revealed that 60% of police forces share victims’ details with the Home Office.

The Lord Bishop said: ‘I fear that this blind spot enables offenders and abusers to use police involvement as a threat to their victims, rather than the source of protection that it should be. Various countries around the world have demonstrated that firewalls can be and are being implemented in different ways to create separation between public services and immigration enforcement.’ 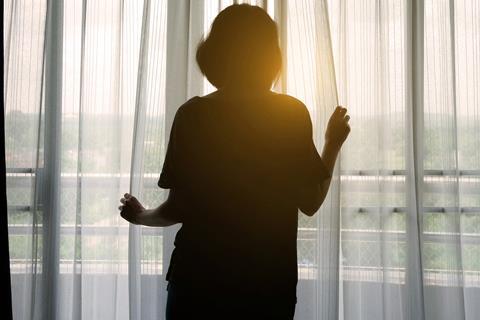 Peers say victims are reluctant to go to the police

Responding, Home Office minister Baroness Williams of Trafford, said sharing information can help to resolve a victim’s uncertainty about their immigration status and ‘remove the desperate situation in which the perpetrator’s controlling and manipulative behaviour continues because of their status’.

Sharing information can also ‘help prevent them facing enforcement action, if they are identified by immigration enforcement in an unrelated setting’ she added.

The government has announced a pilot scheme to assess the needs of migrant women and provide those with no recourse to public funds with emergency accommodation.

Baroness Meacher said the pilot was unnecessary because ‘we know perfectly well what their needs are - the same as those of other women or men subject to domestic abuse’.

Baroness Wilcox of Newport said: ‘It is imperative that the government and public agencies understand that when victims leave an abusive situation and report abuse, they are more likely to be harmed or murdered by the perpetrator. It is therefore essential that the government put in place a safe reporting mechanism and put an end to data-sharing policies when victims approach the police.’

The bill is expected to complete its passage through parliament by the spring.