Today's release of the film adaptation of author Ian McEwan's novel The Children Act, starring Oscar-winning Emma Thompson as a High Court judge, has prompted a children's charity to call for the mandatory provision of independent advocates for children. 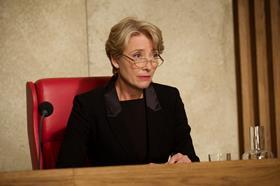 In the film, Thompson's character is tasked with making a life-or-death decision while she presides over a case concerning a teenage Jehovah's Witness. Coram, one of the UK's first children charities, hopes the film's release will draw wider attention to the 'complicated' contexts and circumstances in which decisions about children's welfare are made.

Kamena Dorling, group head of policy and public affairs, said today that family judges regularly face difficult decisions, such as balancing parents' sincerely held beliefs about how children should be brought up against society's expectations and the rights of the child.

Dorling said: 'This country has a strong legal framework for the protection and support of children and young people, but if they are unable actually to enforce their rights then those rights are worth little more than the paper they are written on.

'Key decisions about a child’s future can be made without their views being put forward, or all the relevant information being considered. Coram believes that in all important decisions concerning children (which are made by public bodies or a judicial processes), children should have an appropriate opportunity to participate in the decision-making process.'

The charity calls for the mandatory provision - enshrined in law - of an independent advocate for all children and young people. It also highlights a 'clear need' for greater long-term investment in open access to free legal information and advice for children, young people and families. 'This would help ensure greater resolution of legal issues without cases going to court,' Dorling said.