More details have emerged about the past life and convictions of Michael Cremin, the convicted fraudster and fake lawyer who was listed on a legitimate Chambers website.

According to the Irish Times, Michael Troy Cremin, who was from Douglas in County Cork, was ‘well known’ to legal professionals in Ireland and his latest conviction will ‘come as no surprise’.

The newspaper says that the 41-year-old first came to notice in 1998 after he was convicted of assault on two men in a row over a love interest. He avoided jail on that occasion.

Some time later his family was ordered to pay €4,000 in damages after a dispute with neighbours in which a judge said most of the blame lay at the feet of Cremin,  who had ‘harassed and intimidated’ them. Less than a year later he was jailed for six months for assaulting his then girlfriend, the paper reports.

Cremin became embittered towards the criminal justice system in Ireland and later failed in an attempt to prosecute one of the police officers who had investigated the harassment complaint.

The paper said Cremin completed a law degree via a ‘correspondence course’ and was a familiar figure in the various courts in Cork. It said he would represent himself and ‘turn up in a three-piece suit complete with a prominently displayed fob watch – looking like an aspiring Rumpole of the Bailey’. 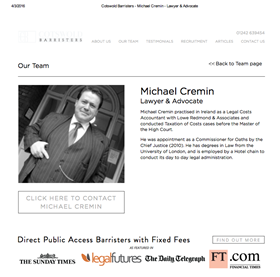 Cremin departed Cork some time after 2005 but the paper quoted an Irish lawyer who, following Cremin’s latest conviction, said ‘he was always going to show up again’.

As the Gazette reported this month Cremin posed as a ‘lawyer and advocate’ to con 51-year-old cancer sufferer Sandra Burch out of her life savings. He was jailed for eight years at Bristol Crown Court last month.

Cheltenham-based barristers’ set Cotswold Barristers had a full online profile of Cremin listed on its website in which there was an image of him wearing a three-piece suit.

The now deleted profile also included a claim that he had a degree from the University of London which the court heard was false.

The chambers, which has declined to comment further, said Burch did not find Cremin through its website.

The Bar Standards Board, the regulator for barristers, has declined to comment on whether it is looking into how Cremin came to be listed on the website.