The bar’s regulator has declined to comment on whether it will investigate how a fraudster who conned a dying woman out of her life savings was able to be listed on the website of a legitimate barristers’ chambers.

Michael Cremin, who was last month jailed for eight years, was profiled as a ‘lawyer and advocate’ on the website of Cheltenham-based Cotswold Barristers. 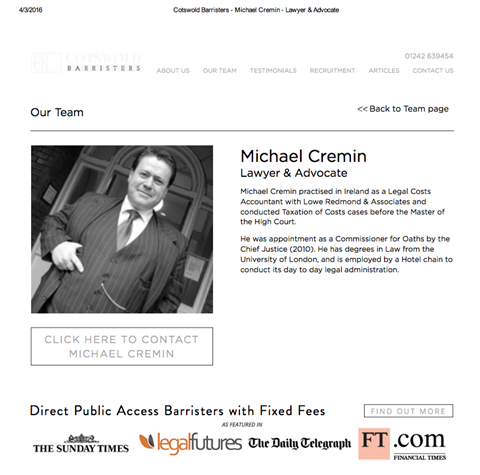 The now deleted online profile, which the Gazette has obtained (pictured), includes a photograph of Cremin in a three-piece suit. A description said: ‘Michael Cremin practised in Ireland as a Legal Costs Accountant with Lowe Redmond & Associates and has conducted Taxation of Costs cases before the Master of the High Court’. The Gazette was unable to contact Lowe Redmond & Associates.

The profile added: ‘He has degrees in Law from the University of London, and is employed by a hotel chain to conduct its day to day legal administration.’ The court heard that the degree claim was untrue.

Cotswold Barristers’ website currently features the profiles of several nationally known barristers, including Daniel Janner QC. There is no suggestion that Janner had any part in Cremin’s relationship with the set.

Cremin posed as a ‘lawyer and advocate’ to con Sandra Burch, who suffers from cancer, out of her £92,000 life savings. He was convicted of six counts of fraud and one count of pretending to be a barrister, which was not related to his appearance on the chambers’ website.

Cotswold Barristers, which gave evidence for the prosecution, told the Gazette that Burch had not been introduced to Cremin through its website.