Many female black, Asian and minority ethnic defendants caught up in the criminal justice system find the legal process 'confusing and jargon-loaded', according to a report that will feed into the findings of a government-sponsored probe into potential racial bias.

Agenda, an alliance of 70 voluntary sector organisations campaigning to help women and girls at risk, and charity Women in Prison say many of the BAME women it spoke to for its report, Double Disadvantage, felt there had not been an opportunity for their stories and circumstances to be taken into account during their trial.

According to the report, published this week, 18% of female prisoners are BAME compared with 14% of the general population. For every 100 white women sentenced to custody at the Crown court for drug offences, 227 black women receive custodial sentences.

Respondents were asked to what extent they felt they had adequate advice from their lawyer about whether or not to plead guilty or not guilty, and whether they were aware of the potential sentencing discount for a guilty plea.

One respondent told the alliance: 'I think especially if you are first arrested and if it is like a serious crime and you're given a duty solicitor they don't really have the time to sit and explain things to you. And it can be overwhelming and then you've got the emotions of being scared and everything else.'

Many women felt comments made by judges were dismissive of their circumstances. Some felt the judges had been prejudiced towards them.

The report states that one woman described how she felt the jury in her case had been encouraged to find her guilty because she was a foreign national and she would be deported if given a sentence of over 12 months. Another woman felt she had been given a high sentence compared with others for a similar crime to 'set an example'.

Agenda says: 'These experiences suggest two possible issues - either sentences are unfair or sentences are fair but the reasoning behind them is not properly understood. Either way this lack of trust in the system is a problem.'

The report was commissioned to feed into barrister and Labour MP David Lammy's independent review of possible racial bias in the criminal justice system. 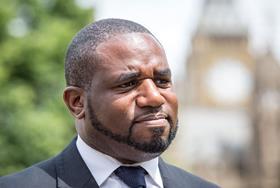 Lammy (pictured) said: 'I have been to prisons, courts and communities up and down the country to gather evidence to inform my review. As part of this I have frequently heard accounts of disproportionate sentencing for minority ethnic groups, who receive longer prison terms than white offenders.

'The findings of the Double Disadvantage research published [this week] again highlight this as a worrying trend, and one which includes BAME women.

'I will be exploring these repeated patterns further before making my final report and recommendations to the prime minister this summer.'