Legal chiefs have cautiously welcomed government plans to scrap short prison sentences but warned that penal reform should not come at the expense of access to justice. 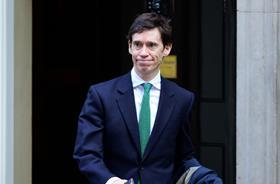 Justice minister Rory Stewart raised the possibility of banning prison sentences of less than six months in an interview with the Daily Telegraph on Saturday. A Ministry of Justice spokesperson said today: 'As we have said previously, short sentences are too often ineffective, provide little opportunity to rehabilitate offenders and lead to unacceptably high rates of reoffending. That's why we are exploring potential alternatives but this work is ongoing and we have reached no conclusions at this time.'

Solicitor Jon Black, president of the London Criminal Courts Solicitors’ Association, told the Gazette that solicitors must welcome any developments that prevent defendants ‘needlessly serving pointless short sentences, that only create further obstacles in their abilities to seek employment and retain accommodation upon release, and in turn drawing them into a cycle of offending as a coping mechanism.’

The proposal could affect legal aid application numbers. Black said the key criteria for granting legal aid whether custody is a likely outcome upon conviction. ‘However,’ he said, ‘this needs to be reviewed because the impact of a conviction itself regardless as to whether a prison sentence is a possibility can often have a crucial and devastating impact upon an individual. Unrepresented defendants are more likely to be convicted and, without representation, the allegations bought by the crown are obviously less likely to be challenged effectively.’

John Bache, national chair of the Magistrates' Association, said existing sentencing guidelines are clear that a prison sentence should be used only when unavoidable. Magistrates 'already use custody only as a last resort. It is therefore unlikely that the proposed "presumption against" short sentences would make any significant difference'.

If the ministry wants to see fewer people receive short prison sentences, Bache said the ministry should focus on ensuring that effective community sentences are available in every area of the country, 'which is simply not the case at present'.

Last year justice secretary David Gauke said short prison sentences should be imposed only 'where absolutely appropriate, given the evidence that those on community sentences are less likely to offend'.

Bache said magistrates should be given the power to review the progress made by an offender serving a community sentence: 'This would enable magistrates to impose community sentences with confidence, knowing that they provide an appropriate alternative to custody while helping offenders to turn their lives around.'