Hale warns against judicial appointment reforms ahead of Queen's speech

The prospect of US style political oversight of senior judicial appointments was yesterday attacked by the outgoing president of the Supreme Court - just hours before the government is due to announce such a reform. Today's Queen's speech is widely expected to include measures to make the UK's most senior judges 'more accountable to parliament'. 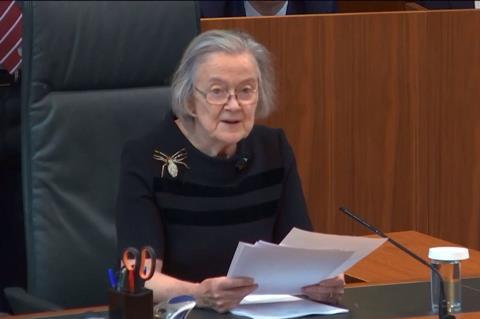 A review of the appointments process is expected to be announced as part of a package of constitutional reforms including repeal of the Fixed Term Parliaments Act and a bill to set up the 'constitution, democracy and rights commission', promised in the Conservatives' manifesto.

In a foretaste of reaction from the legal establishment, the outgoing president of the Supreme Court, Lady Hale of Richmond, yesterday used what were billed as 'valedictory remarks' to attack politicisation. She noted that judges have not been appointed for party political reasons 'since at least the second world war'.

'We do not want to turn in to the Supreme Court of the United States, whether in powers or in the process of appointment,' Lady Hale said. Of her colleagues on the bench, she added: 'We do not know one another’s political opinions – although occasionally we may have a good guess – and long may that remain so.'

This morning's Queen's speech is also expected to announce amendments to the Human Rights Act to curb the use of judicial review and provide further exemptions for the security services.

The speech is expected to announce 40 bills, 18 more than in the parliamentary programme unveiled in October and curtailed by the General Election.