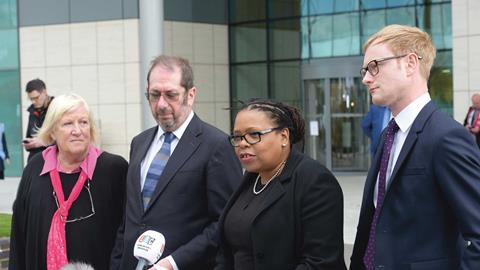 A solicitor who co-led the campaign for justice for the Hillsborough families has revealed he did not expect a favourable result until the very last moment.

Elkan Abrahamson, whose Liverpool firm Jackson Canter represented 20 families of victims of the 1989 disaster, said the jury’s findings of unlawful killing came as a ‘welcome surprise’.

‘We just couldn’t allow ourselves to think we were going to get it,’ he told the Gazette. ‘From day one we were saying we won’t get [a conclusion of] unlawful killing. It was only on the day itself I was saying I was quite optimistic.’

Up to 45 staff from the firm worked on the two-year inquest at any one time, funded by contributions from government departments.

‘I told everyone to take the day off as they were exhausted,’ added Abrahamson. ‘It has been unremitting, working seven-day weeks and 24-hour days.’

Abrahamson, who won the accolade of Gazette Legal Personality of the Year in the 2013 Law Society Excellence Awards, acted for the late Anne Williams, whose son Kevin died at Hillsborough, for more than 20 years.

The Crown Prosecution Service is investigating whether to bring criminal proceedings.

The government is understood to be considering appointing a state-funded independent public advocate to act for bereaved families after a public disaster.

Shadow home secretary Andy Burnham told the House of Commons there was a ‘mismatch’ between legal representation of public bodies and that of the bereaved. ‘This time the families had the best lawyers in the land. If they could have afforded them back in 1990, history might have been very different,’ he said.