A 'mechanism' to allow the government to introduce ad hoc legislation to correct court judgments that ministers believe are 'incorrect' will form part of proposals to reform the Human Rights Act, the lord chancellor has revealed.

In an interview with the Sunday Telegraph, Dominic Raab MP said he expected a consultation on his proposals to be opened within the next two months. The aim, he said, is to restore power to parliament. 'We want to protect and preserve the prerogatives of parliament from being whittled away by judicial legislation, abroad or indeed at home,' he said.

Referring to the European Court of Human Rights, Raab said: 'We want the Supreme Court to have a last word on interpreting the laws of the land, not the Strasbourg court.' He said it was wrong that judges in Strasbourg ruled on matters relating to British soldiers fighting overseas and revealed that he was examining how to curtail the court’s influence in the UK. 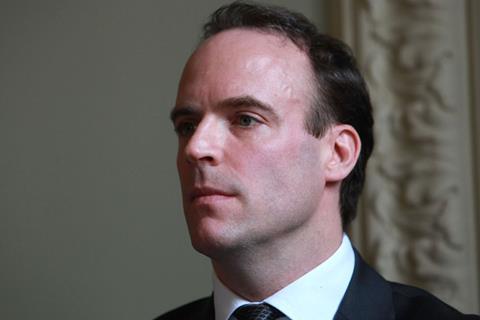 Raab said: 'If you read the negotiating history to the European Convention, it was never supposed to have extraterritorial effect … I think that’s wrong, that any court is effectively through judicial legislation, creating new law rather than just applying it. So I think we will want to have a look at that.'

His concerns also include the Human Rights Act requirement that judges must take European Court of Human Rights decisions 'into account'.

'I don’t think it’s the job of the European Court in Strasburg to be dictating things to, whether it’s the NHS, whether it’s our welfare provision, or whether it’s our police forces,' Raab said. Those public services should be governed by elected lawmakers rather than judicial legislation.

Outlining plans to use legislation to 'correct' judgments, Raab said: 'We’re identifying the problems and we’re making sure we fix them… We will get into the habit of legislating on a more periodic basis and thinking about the mechanism for that. Where there have been judgments that, albeit properly and duly delivered by the courts, we think are wrong, the right thing is for parliament to legislate to correct them.'

The interview did not mention the Gross review of the Human Rights Act, set up by Raab's predecessor, Robert Buckland MP and which was due to report over the summer.

Law Society president I. Stephanie Boyce noted that it is the job of the courts to interpret laws proposed by government and made by parliament. 'It is vital for a healthy constitution that we maintain the separation between parliament’s powers to pass laws, and courts’ responsibility to interpret them. We will have to wait to see the detail in any proposals but would certainly look very carefully at anything that would create new ways to overturn judicial decisions.

'If the Human Rights Act were to be limited to the UK, British soldiers and citizens abroad would lose the protection they currently enjoy. Cutting back our commitment to human rights to our domestic sphere would also damage the UK’s international reputation and have perverse consequences for the rule of law.

'An expert panel is reviewing the Human Rights Act to help the government understand if any changes are needed. We hope the government will wait for the panel’s forensic analysis before launching related proposals.'