The attorney general has defended the government’s decision to reform judicial review, telling public law specialists that cases such as the Article 50 and prorogation challenges have introduced ‘uncertainty’ into the constitutional balance between parliament, government and the courts.

In a keynote address to Public Law Project’s annual conference today, Suella Braverman QC MP said it was ‘crucially important that we neither permit, facilitate or encourage judicial review to be used as a political tool by those who have already lost the arguments’.

Braverman said the UK had seen a ‘huge increase’ in political litigation. ‘The government has to spend time and money responding to such challenges. The full economic cost of doing so is never recoverable. The government is successful in more than 65% of judicial reviews against it, but it is vital that judicial review does not become a vehicle of choice for failed political campaigners.’

Braverman spoke about ‘significant decisions on highly charged issues’, such as R (Miller) v Prime Minister, regarding the prorogation of parliament. Braverman said the Supreme Court’s decision ‘recast the previously clear divisions between the justiciable and non-justiciable, between convention and law’. 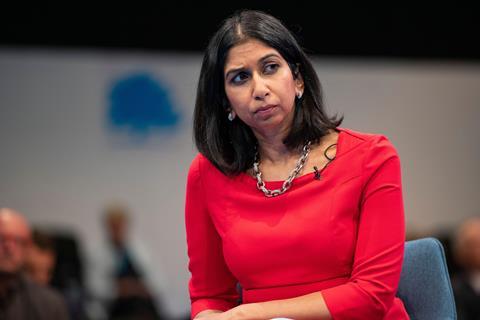 However, she welcomed the Supreme Court’s decision in R (on the application of SC, CB and 8 Children) v Secretary of State for Work and Pensions and ors, concerning the two-child benefit limit. Braverman ‘wholeheartedly agreed’ with a strong statement made by Lord Reed against public law actions.

Braverman told the conference there would be perfectly legitimate instances where the government thinks it worthwhile and important to invite parliament to legislate to overturn individual court decisions. She gave the example of the decision to reverse the effect of the Supreme Court’s judgment in Cart, which would prevent Upper Tribunal appeals being subject to judicial review.

Defending the Judicial Review and Courts Bill, which seeks to ‘restore the balance of power between the executive, legislature and the courts’, Braverman said that even if the pendulum returned to a more balanced position, ‘the mould has been broken’. A future Supreme Court may enter territory ‘that should be the sole preserve of those generally answerable to the people’. The bill is expected to have its second reading in the Commons in the next few weeks.

Braverman said: ‘My view is that the last decade has demonstrated an increased appetite for political litigation and more worryingly an appetite for putting judges in an invidious position by asking them to decide political matters for judicial review. It is important we recast the mould. The ramifications of not doing so are profound. The authority of the judiciary must never be pitched against the authority of the people… If we keep asking judges to answer inherently political questions, we are ignoring the single most important decision-maker in our system – the British people.’

During her speech, Braverman said she would support lawyers who take on difficult cases. 'It has to be right in a free society that everyone should be able to seek legal advice to understand their rights and put their case to one of those independent judges.' Recent criticism of a leading QC for acting, 'entirely appropriately', for a sovereign government were wrong, she said.

'In other circumstances, when lawyers cloak themselves in a political cause, it is difficult to take them seriously when they complain about criticism,' the attorney general added. 'If you step into the political arena, your political motivations and beliefs do become fair game for criticism.'