Calls by Crown Prosecution Service inspectors for a culture change to improve engagement between prosecution and defence appear to have fallen on deaf ears.

In a report published last year, the CPS Inspectorate said lawyers at the agency were failing to engage effectively with the defence before the first hearing in a case. Publishing a follow-up report today on the CPS's contribution to the Transforming Summary Justice initiative, inspectors said there was no record of defence engagement in 87.6% of cases in its file sample.

Inspectors acknowledged the figure was better than the 1.8% engagement level in its initial inspection. But 'it demonstrates that there has not been the change in culture required to embrace this expectation'.

The Transforming Summary Justice initiative was established in 2015 to reduce delays in magistrates’ courts, hold fewer hearings per case and increase the number of trials that go ahead the first time they are listed.

Yesterday's report states that, in interviews and focus groups, prosecutors and managers admitted they rarely attempted to contact the defence representative before the first hearing.

Barriers to engagement before a case reaches court included: not knowing which law firm represents the defendant; defence solicitors not seeing the defendant to take instructions; demands on defence practitioners' time, which takes them out of their office and makes them harder to contact; and the time available to prosecutors to conduct reviews for first hearings.

The Criminal Procedure Rules impose an obligation on the prosecution and defence to communicate 'at the first available opportunity and in any event no later than the beginning of the day of the first hearing'.

Inspectors said: 'Against this backdrop, the CPS cannot abandon the principle of defence engagement, but the current expectation that this takes place in every contested magistrates' court case before the first hearing date appears in practice to be unrealistic.'

The report recommends that the CPS review current engagement arrangements and issue revised guidance about what is expected in particular cases. 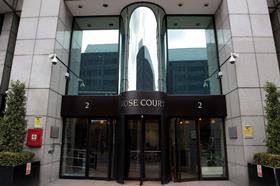