Labour conference: civil servants should not be deciding people's liberty

Cases normally dealt with by judges should not be handed to civil servants, the shadow attorney general has said, criticising the government's approach over court reforms.

Shami Chakrabarti told an event at the Labour Party's annual conference that she was sceptical about the government's Courts and Tribunals (Judiciary and Functions of Staff) Bill. The legislation, which replaces the Courts Bill that was halted last year by the general election, will allow court staff to deal with 'routine matters' and free up judges' time to concentrate on other matters. 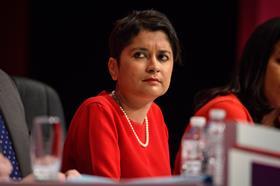 Chakrabarti said she was 'pretty disappointed so far in the government's approach to even light and healthy scepticism about the notion of delegating really what are significant judicial functions to relatively poorly paid court staff'.

She said the government has been 'resistant' to the idea that such functions should be delegated only to people with a minimum number of years' call or qualifications or that they should not make decisions affecting someone's liberty or financial cap.

Chakrabarti was discussing court reform, rights and the rule of law at an event organised by human rights group Justice and the Society of Labour Lawyers.

The shadow attorney general insisted she is not resistant to reform: 'I do not think it's quite sincere to call reduction "reform" or to say you can do justice on the cheap any more than you can do security on the cheap. Our court buildings are creaking and crumbling. The profession is hugely demoralised. None of that seems like reform. It seems like a downright attack. Just because there is an atmosphere of demoralisation, we should not be taking this lying down.'

Chakrabarti also insisted that, when it comes to technology, she is no Luddite: the internet should be used to support legal literacy, but it is lawyers who will empower clients to make informed decisions.

She said: 'I have never met someone going through a life crisis - whether you're a company director facing disqualification, an MP being accused of fiddling your expenses, losing your job, having your family split up or being denied access to your children - these are not life crises that can be dealt with online.

'I've never met someone with a crisis who did not need a person to sit across the table from them and show a bit of empathy as well as expertise judgement. This is based on my experience as a recipient and provider of legal services.'