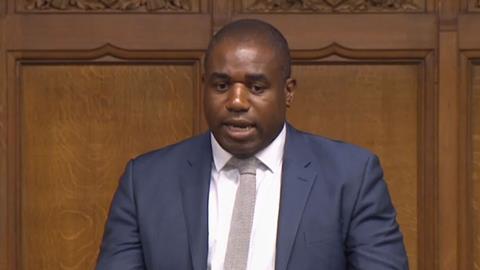 Addressing the Royal Society of Arts in London yesterday in an event entitled 'Justice for all?', David Lammy said shared responsibility could help to tackle racial disparity and restore the criminal justice system's reputation.

The system, he said, 'is conceived as a series of processes, with little sense or understanding of how well they work together or how they work for the communities they are supposed to serve'.

In youth courts, 'magistrates themselves are not empowered to problem solve, nor can they hold to account the raft of frontline professionals that surround young people when things go wrong. When schools exclude them, when there are no role models or mentors to guide them, when work or training opportunities or constructive pursuits aren't available, children get into trouble'.

The definition of 'community' is widening all the time, he added, as local courts are closed and boundaries are stretched further. Although parenting orders exist by law, they are seldom used. In the year ending March 2016, 250 parents were issued with orders by the courts despite approximately 89,000 people aged between 10 and 17 being arrested and 28,000 young people being found guilty at court.

Lammy said: 'The teachers, doctors, police men and women, and community members, who should already be featuring in their young lives, need to be more actively involved when a child gets into trouble with the law.'

He praised New Zealand's Rangatahi courts, which have been designed to 'embrace not only the traditions of indigenous Maoris, but also their culture and approach towards raising children'.

'Elders and members of the community take an active part in hearings and in determining appropriate sentences for children who break the law. The responsibility, and accountability if things go wrong, is shared with the community to which the child belongs, and to which he or she will return,' he said.

Community courts, he later said, 'should be the direction of travel'. He added: 'A black youth carrying a knife in Tottenham - if you put him in front of religious elders in the community, that's not a soft option.'

Lammy is due to publish the final recommendations from his government-sponsored review in September.