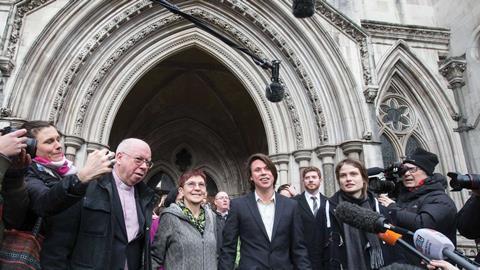 The High Court today ruled that Lauri Love, who is accused of hacking into US government computers, cannot be extradited to the US in the first major test of a forum bar to extradition introduced in 2013.

The lord chief justice, Lord Burnett, and Mr Justice Ouseley said in today's judgment that Love's extradition 'would be oppressive by reason of his physical and mental condition'.

Love, who has Asperger's syndrome, was represented by national firm Kaim Todner, which specialises in extradition law and represented 'Pentagon hacker' Gary McKinnon. Kaim Todner said it was 'delighted' that Love has been discharged following his appeal.

Civil rights organisation Liberty intervened in the case. Emma Norton, head of legal casework, said: 'Where unlawful activity is alleged to have taken place in the UK, those suspected should be tried in the UK – not packed off to foreign courts and unfamiliar legal systems. This is especially important in cases of vulnerable people like Lauri Love.

'We are delighted that the court has today recognised Lauri’s vulnerability, close family connections to the UK and the potentially catastrophic consequences of extraditing him. This was always a case that could have been prosecuted here and it's shameful that Lauri and his family have been put through this terrible ordeal.'

In their judgment, Burnett and Ouseley emphasised 'that it would not be oppressive to prosecute Mr Love in England for the offences alleged against him. Far from it. If the forum bar is to operate as intended, where it prevents extradition, the other side of the coin is that prosecution in this country rather than impunity should then follow'.

The judges said the Crown Prosecution Service 'must now bend its endeavours to his prosecution, with the assistance to to be expected from the authorities in the United States, recognising the gravity of the allegations in this case, and the harm done to the victims. As we have pointed out, the CPS did not intervene to say that prosecution in England was inappopriate. If proven, these are serious offences indeed.'

Commenting on the ruling, Edward Grange, a partner at criminal defence firm Corker Binning, said Love was the first high-profile case to properly test the effectiveness of the forum bar to extradition introduced into legislation following Theresa May's decision as home secretary in 2012 to block Gary McKinnon's extradition to the US.'

Grange said: 'Since its introduction, all have failed in their attempts to argue that, by reason of forum, extradition would not be in the interests of justice. As a result, the impact of the forum bar has been seen as illusory in its effect. That perception may now begin to change.'

Rebecca Niblock, an extradition lawyer and partner at London firm Kingsley Napley, said today's judgment 'sets a valuable precedent for those targeted by a US criminal justice system with an extraordinarily long reach'. She added: 'It is right for British courts to deal with individuals who are alleged to have committed crimes whilst in the UK. Campaigners have long awaited the day British judges uphold the forum bar to extradition and have today, at last, seen fairness prevail.'

A CPS spokesperson said this afternoon: 'We have received the High Court’s judgment on Lauri Love which we will now consider before making any further decisions.'