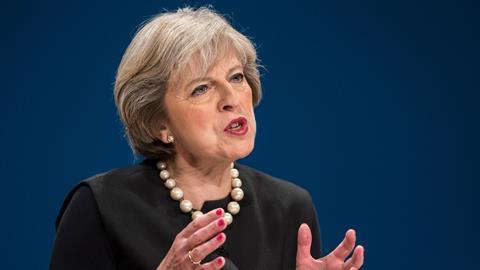 May pledges to end ‘industry of vexatious claims’ against forces

Much-trailed plans to bring an end to an ‘industry of vexatious claims’ against the armed forces were revealed to an appreciative audience at the Conservative party conference today.

The PM Theresa May and defence secretary Michael Fallon announced plans this morning to introduce a presumption of derogation from parts of the European Convention on Human Rights in future conflicts overseas.

May said: ‘My government will ensure that our troops are recognised for the incredible job they do. Those who serve on the frontline will have our support when they come home.

‘We will repay them with gratitude and put an end to the industry of vexatious claims that has pursued those who served in previous conflicts.’

The government’s announcement states that over the past decade, a series of court judgments has extended the extra-territorial jurisdiction of the European Convention on Human Rights to the battlefield.

Military advisers warn that this risks undermining the operational effectiveness of the armed forces.

The government says the intention to derogate from the ECHR, subject to an assessment of the circumstances that exist at that time, will protect British troops serving in future conflicts from the kind of persistent legal claims that have followed operations in Iraq and Afghanistan ‘on an industrial scale’.

The government says that claims that ECHR rights have been breached drive much of the litigation that the Ministry of Defence faces, causing considerable personal distress to individual servicemen and servicewomen, and costing taxpayers millions of pounds.

Fallon said the change will help to ‘protect our troops from vexatious claims and ensure they can confidently take difficult decisions on the battlefield’.

He added: ‘And it will help enable us to spend our growing defence budget on equipment, not fees for lawyers.’

Armed forces will continue to operate under a comprehensive legal framework in accordance with international humanitarian law (the law of armed conflict including the Geneva conventions) and with service law, which includes the criminal law of England and Wales, regardless of where they are serving, the government said.

It noted that the announcement ‘follows the closure of Public Interest Lawyers, the firm responsible for filing thousands of claims against the armed forces’.

A statement added that the announcement ‘will complement the work being undertaken by the government, to draw up a time limit for future claims, create tough new penalties for firms who engage in vexatious practices and crack down on the “no win, no fee” deals that have been exploited to tout for business’.

Today's announcement is already generating fierce debate among lawyers, with rights group Liberty among those condemning the move.

Director Martha Spurrier said: 'The government cannot be allowed to leave its human rights commitments at our borders. Doing so will leave abuse victims unprotected and our troops powerless when the state fails to keep them safe from harm.'

She added: 'To save the Ministry of Defence from the shame of having to admit that civilians suffered abuse on its watch, ministers are prepared to rob our soldiers of this sensible legal framework that both clarifies their use of force and offers them redress when their own rights are breached. For a supposedly civilised nation, this is a pernicious and retrograde step that will embolden our enemies and alienate our allies.'

The Law Society responded to the government’s proposals by warning that derogation could risk removing legitimate rights from people, including members of the armed forces.

Society president Robert Bourns said: ‘The Law Society condemns vexatious claims and will work with government and the legal profession to eradicate the small number of inappropriate claims. Britain’s recognition of human rights and the rule of law is respected across the world. We must not forego these guiding principles in order to tackle a small number of vexatious claims.

‘The government's proposal to derogate from the ECHR risks preventing genuine claims, which might include those brought by UK armed forces against the Ministry of Defence. It is the role of the justice system to determine the validity of claims, a function that is and must remain separate from government.’

Bourns added: ‘If the UK is seen to reinterpret international conventions, we risk undermining our standing internationally, our ability to hold other states to account and disrupting a far wider culture of international cooperation that has been built over many years.’

Gazette columnist Roger Smith, former director of human rights group Justice, said: 'It is pretty unattractive to argue that British military action is generally undertaken to uphold human rights and humanitarian principles, but is not to be subject to human rights scrutiny. You can see how that might encourage some scepticism among the populations allegedly being assisted.'

From the European perspective Jonathan Goldsmith, former secretary general of the Council of Bars and Law Societies of Europe and also a Gazette columnist, also voiced concern at the precedent being set.

'I agree with Liberty on this,' Goldsmith told the Gazette. 'The right not to be tortured, which is the basis of some or many of the claims made, cannot be derogated from anyway; and that derogation does not send out a good message to those to whom we like to preach about human rights, which seems to be much of the world.'

Goldsmith also pointed out that the situation will be significantly complicated by the potential implications for Northern Ireland.

'As I understand it, although the UK has previously derogated from the ECHR during the Troubles, the ECHR is now seen as a strong protector of human rights in Ireland, part of the Good Friday Agreement and of individuals’ rights,' he stressed. 'Leaving the EU and leaving the ECHR are obviously not the same things, although they are connected.'