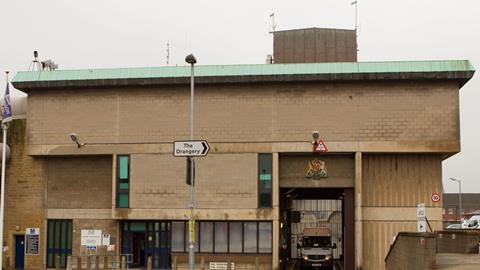 A man jailed for 25 years for his role in a drug-smuggling plot has scored a victory over the Ministry of Justice, which has been told it failed to carry out ‘reasonable research’ about imports of kosher food into prisons.

In a judgment handed down on 19 September, the first-tier information rights tribunal said there ‘must have been’ more information that the MoJ could have revealed about its policy of supplying kosher food to Orthodox Jewish prisoners.

Simon Price, an Orthodox Jew, was jailed in 2005 as part of a plot to smuggle cocaine worth £35m into Britain.

In 2013, he sued HMP Frankland in Durham, for being ‘antisemitic’, claiming that he was not given his own pots and pans to cook kosher meals.

The latest dispute centred on a response to a freedom of information request Price had filed about Wakefield prison (pictured), which the information commissioner deemed had been adequately answered.

Price, who filed the request in July last year, said that the kitchen manager at HMP Wakefield claimed he was advised that any prisoner the MoJ has agreed is a strictly observant Orthodox Jew must arrange for his shul (synagogue) to provide appropriate food.

The terms of the agreement were set out in the prison’s catering operation manual (COM).

Price asked for full details of the instructions and the procedures in the manual and on what authority any provision had been made for a prisoner to have food brought in from outside the prison.

He also asked for the relevant instructions given to security departments.

The MoJ responded on 5 October 2015, confirming that the department holds ‘some but not all’ of the information requested and reproduced ‘relevant parts of the catering manual’.

Price demanded a review, complaining that the response was ‘little more than a cut-and-paste extract from the COM’, which he had already seen.

He added that there must be further information falling within the scope of his request.

The information commissioner said it accepted the MoJ’s findings, prompting Price to appeal to the tribunal.

The tribunal said it accepted ‘unchallenged evidence’ that arrangements ‘above and beyond those set out in the prison service instructions and COM are in existence’.

‘For those arrangements to exist, it would be inconceivable that authority would not be needed from a senior source,’ Judge Annabel Pilling wrote.

She added: ‘Those arrangements would likely have been the subject of advice from Jewish faith advisers and in my view it is inconceivable that this would not have been recorded. I am not satisfied that the MoJ has made a reasonable search for information falling within the scope of this request.’

She added that the MoJ will have to consider what further information is held and whether the cost of complying would exceed the appropriate limit.