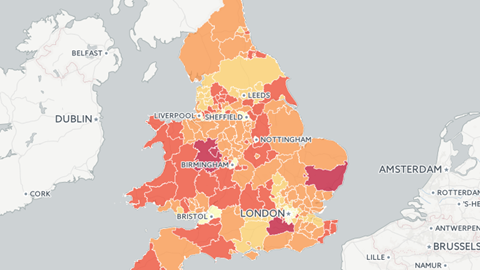 The Law Society today calls on the government to urgently fill legal aid ‘advice deserts’ for housing issues, publishing an interactive map showing the scale of the problem.

The ‘legal aid deserts heat map’ (please see full interactive map below) shows that nearly a third of legal aid areas have just one solicitor provider who specialises in housing and whose advice is available through legal aid.

Surrey, Shropshire and Suffolk have no housing provider at all – the darker the colour, the fewer providers there are locally.

Society chief executive Catherine Dixon said early legal advice on housing matters could make the difference between a family being made homeless or not.

She said: ‘People who require legal aid advice for housing issues often need it urgently. Families are unable to access justice because they cannot afford to travel to see the one provider in their area who may be located long distances from where they live.’

Highlighting other problems that can arise, the Society said a single provider in a large area may not have the capacity to provide advice to all those who need it.

Having a single provider could also lead to a conflict of interest, as the Gazette reported in April .

A conflict of interest could also arise if the firm has been acting for the landlord on another issue, such as a family matter, which means they would not be able to act for the tenant, the Society said.

Dixon urged the government to urgently commission an independent review into the sustainability of the civil legal aid system.

The review should also look at legal aid contracting arrangements, the Society added, calling for second providers to be commissioned in areas that currently have either one or none.

A spokesperson for the Ministry of Justice said legal aid housing advice was available throughout England and Wales, either face-to-face or from the civil legal advice helpline.

The spokesperson added: 'Last year we spent in excess of £1.5bn on legal aid, and have made sure support remains available in the most serious cases, including where people are facing losing their home.

'We are also taking active steps to ensure people are able to access the help they need, when they need it, including identifying new suppliers to safeguard provision.'

The Society is conducting a ‘full analysis’ of the impact of the Legal Aid, Sentencing and Punishment of Offenders Act, which removed vast swaths of law from the scope of civil legal aid when it came into force in April 2013. The report will be published later this year.