Smartphones and social media are causing headaches for judges, a Court of Appeal judge has warned in a speech highlighting current challenges faced in jury trials. 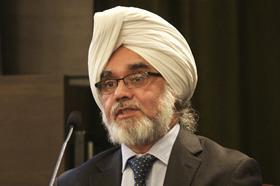 Although jurors are warned at the start of a trial not to research cases on the internet, Lord Justice Singh (Sir Rabinder Singh QC) told the Criminal Bar Association conference last week that the 'quick and easy use' of smartphones has made it impossible to guarantee that there will never be problems.

Singh said: 'When I tried a murder case at Lewes in 2014, there was a submission of no case to answer on behalf of one of the two defendants at half time. I rejected that submission. Of course all of that happened, as it must, in the absence of the jury. Very shortly afterwards my ruling was circulated on social media by someone who had been in the public gallery. Thankfully it was possible to have this material removed quite quickly and no one suggested that any member of the jury had seen it.'

Singh told practitioners that they should, if necessary, remind the trial judge to tell the jury in introductory remarks not to talk about a case, even to other jury members, except when they are all together. He recalled a Court of Appeal case this year where the trial judge failed to warn the jury. 'In the end this did not affect the outcome of the appeal although some members of the jury had spoken about the case when they went out for a drink, but it is worth remembering that counsel have a responsibility in this regard as does the judge,' he said.

Singh recalled a murder case he tried in 2014 when a juror failed to mention that he recognised the name of a witness but later mentioned it to other jurors. The juror was arrested and his case was referred to the attorney general.

Defence counsel should make a short speech after the prosecution has opened its case to help juries understand what they should focus on before they begin to hear evidence, Singh suggested. In some cases, a 'routes to verdict' document should be given to juries before closing speeches. Juries should receive written directions on the law, including the burden and standard of proof, at the trial's outset. He said that at a murder trial last year, the defence counsel briefly explained to the jury that the issue in the case was going to be diminished responsibility.