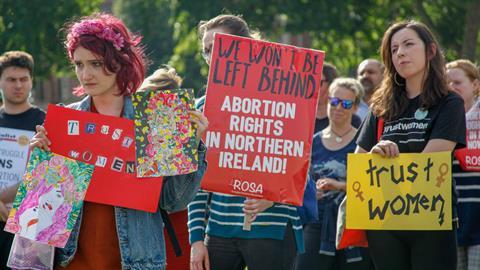 The Supreme Court today ruled it could not determine whether Northern Ireland’s abortion laws are in breach of the European Convention on Human Rights.

A majority (Lord Mance, Lord Reed, Lady Black and Lord Lloyd-Jones) concluded that NIHRC did not have standing to bring these proceedings. As such, the court did not have jurisdiction to make a declaration of incompatibility in this case.

A minority of the court (Lady Hale, Lord Kerr and Lord Wilson) considered that NIHRC did have standing to bring these proceedings.

Abortion is unlawful in Northern Ireland unless it is necessary to preserve the life of a woman, carrying a potential sentence of up to life imprisonment.

Northern Ireland has been without an executive since January 2017, and some believed the reverse decision by the Supreme Court may have imposed a burden on Westminster to change the law.

But the court’s ruling leaves that possibility open: on the substantive compatibility issues, a majority - Lord Mance, Lord Kerr, Lord Wilson and Lady Hale - held that the current law is incompatible with the right to respect for private and family life, guaranteed by article 8 of the Convention, insofar as it prohibits abortion in cases of rape, incest and fatal foetal abnormality.

Other organisations included in the appeal were The Family Planning Association (FPA), the British Pregnancy Advisory Service (BPAS), Birthrights, the Abortion Support Network, Royal College of Midwives, Alliance for Choice, and Antenatal Results and Choices (ARC).

’The Prime Minister must now act to ensure that the UK government are no longer acting unlawfully by breaching the human rights of women across Northern Ireland.’