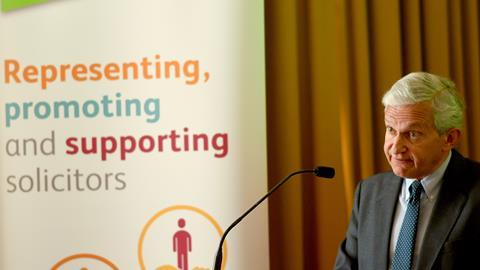 Tech will see the end of contested trials, says Vos

Round-the-clock surveillance from mobile phones and location devices will greatly cut the number of contested criminal and personal injury cases over the next generation, one of the most senior judges has predicted.

Giving the inaugural Law Society Future of the Law lecture at Chancery Lane, Vos said lawyers at all levels need to embrace innovation ‘across the board’. He noted the American Bar Association’s model rules of professional conduct require practitioners to 'keep abreast of changes in the law and its practice, including the benefits and risks associated with relevant technology’.

In financial services and commercial law, Vos said the profession is already in the course of a revolution thanks to blockchain-enabled smart contracts and artificial intelligence. 'The likely uses of these technologies are endless,’ he said, predicting the widespread automation of transactions. But transactions will still need to be negotiated, and disputes resolved: 'However automated or smart a contract may be, its legal consequences and effects will still need to be explained to human beings.’

Dispute resolution will move largely online - 'the millennial generation, which expects to be able to obtain everything they want in an instant on their mobile devices, will not make an exception for justice’.

He warned commercial lawyers that the Online Solutions Court will eventually handle high value disputes. 'I hear many people in the Business and Property Courts saying that the online solutions court is not really their concern, because major litigation will carry on as before. I do not agree. I think that business lawyers need to look very closely at the developments in smaller litigation, because these are bound to be the blueprint for the roll-out of online dispute resolution to more significant and high value disputes.’

Fewer cases would turn on matters of primary fact - with the same applying to criminal cases. As for tort and personal injury, ’I somewhat doubt whether lawyers will be much involved in that by 2050. Even if there is not a no-fault compensation scheme for road accidents and medical negligence by that time, the expertise required will not be legal so much as medical and scientific.’

Vos cast doubt on predictions that the ability to predict outcomes with artificial intelligence would dissuade many litigants from going to court. Machine learning does not take into account human frailties, he noted. 'There are many such frailties. One is unreasonableness. My experience at least is sometimes that some of the most unreasonable humans can be involved in litigation.’