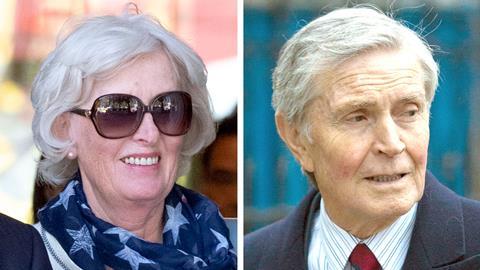 The Supreme Court has told a 68-year-old woman she must remain married to her husband for the time being in a case it said 'generates uneasy feelings'.

Handing down its highly-awaited judgment in Owens v Owens, the court dismissed Tini Owens's appeal in relation to a lower court's decision to refuse to grant her a decree nisi, even though the judge had correctly found that the marriage had broken down.

Lord Wilson, with whom Lord Hodge and Lady Black agreed, said 'there was no denying that Mrs Owens's appeal generates uneasy feelings'. However, he said 'uneasy feelings are of no consequence in this court, nor indeed in any other appellate court'.

Were Mrs Owens to continue to live apart from her husband until 2020, 'he would surely have no defence to a petition' on the basis that they will have lived apart for five years', Wilson said. 'Parliament may wish to consider whether to replace a law which denies to Mrs Owens any present entitlement to a divorce in the above circumstances,' he added.

Lady Hale, Supreme Court president, and Lord Mance gave concurring judgments. Hale said she found the case 'very troubling' but said 'it is not for us to change the law laid down by parliament - our role is only to interpret and apply the law that parliament has given us'.

Mrs Owens's solicitor Simon Beccle, a partner at London firm Payne Hicks Beach, said his client is 'devastated' by today's decision 'which means that she cannot move forward with her life and obtain her independence from Mr Owens'.

Beccle said Mrs Owens 'had hoped that the Supreme Court, as it often does, would make a decision which would be forward thinking and fit with the current social mores'. In upholding the lower court's decision and not granting Mrs Owens a divorce or remitting her case to be reheard, the Supreme Court 'has missed an opportunity to assist Mrs Owens and to move case law on after over 40 years'.

3PB barrister Hamish Dunlop, who represented Hugh Owens, said the court had 'rightly rejected' Mrs Owens' attempt 'radically to reinterpret the requirements for a behaviour divorce brought under the Matrimonial Causes Act 1973. In bringing her appeal, she was essentially advocating divorce by unilateral demand of the petitioner; ignoring the court’s duty to have some objective regard to the respondent’s behaviour'.

Family law group Resolution intervened in the case. Nigel Shepherd, former chair, said: 'Whilst the Supreme Court has, reluctantly, applied the law correctly, the fact that they have done so confirms there is now a divorce crisis in England and Wales, and the government needs to take urgent action to address it.

'In this day and age, it is outrageous that Mrs Owens - or anybody - is forced to remain trapped in a marriage, despite every judge involved in the case acknowledging it has come to an end in all but name. Today’s judgment underlines just how vital it is that government now urgently reforms the divorce law.'