A litigant in person has been allowed to serve their claim through an unregistered barrister, despite protestations it was unlawful.

In Ndole Assets Ltd v Designer M&E Services UK Ltd, The Honourable Mr Justice Coulson said the claimant's use of the third party to start the claim was no different to solicitors employing a process-server. But he urged the barrister to make it clearer in future that he was not acting in any capacity as a solicitor.

The claimant in the case, British Virgin Island-based company Ndole, had been assisted by unregistered barrister Alexander Dain and his company CSD Legal Limited. 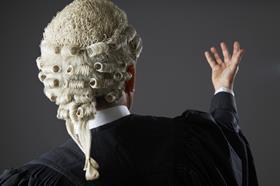 Ndole had written on headed notepaper to the Technology and Construction Court in October 2016, enclosing three signed copies of the claim form and asking the court to issue the claim.

Apart from this letter, CSD did everything in the proceedings on behalf of Ndole, including providing particulars of claim to the defendant.

It was common ground that, as an unregistered barrister, Dain was unable to carry out reserved legal activities, and the defendant argued that the service of a claim form and particulars of claim amounted to such an activity. It followed that service of these documents was invalid.

The court heard the defendant’s solicitors Clarke Willmott exchanged correspondence with CSD, before CSD confirmed it was ‘assisting the claimant in this matter’. Coulson said the obvious inference was that CSD Legal were solicitors.

Defence lawyers said the service of the claim form and particulars of claim amounted to either the ‘commencement’ or ‘prosecution’ of proceedings and was a reserved legal activity.

Ndole argued that civil procedure rules do not place restrictions on who can serve documents.

Coulson accepted that correct service was a prerequisite for the successful prosecution of an action.

He agreed that claims forms are regularly served by process-servers, although he stressed this remained the responsibility of solicitors and was therefore still reserved.

But where the claimant was a litigant in person, the judge ruled that they were entitled to delegate the task of serving a claim.

‘It would be nonsensical to conclude that, whilst a solicitor can delegate the carrying out of this task to a third party, a litigant cannot do so in person. There would be no basis for such discrimination,’ said Coulson.

He added that a litigant in person could ask an agent to serve claims on their behalf, and there was nothing unlawful about the service in this case.

However, the judge advised Dain to make CSD Legal’s true status more clear in future. The barrister had not made it obvious in letters that CSD Legal was not a firm of solicitors.

Coulson added: ‘Although I consider that he did not act in breach of the 2007 [Legal Services] Act, and I conclude that these letters were irrelevant to the service issue in any event, I do find that Mr Dain sailed too close to the wind on a number of occasions.’