On 10 March, under the Legal Aid, Sentencing and Punishment of Offenders Act 2012, significant changes were made to the Rehabilitation of Offenders Act 1974 so that criminal outcomes become spent much sooner, for those seeking basic criminal record certificates (see table).

The rehabilitation period is nil for absolute discharge or any order not specified (on the table). This also applies to alternatives to prosecution. Driving endorsements do not become spent.

On 11 December 2013, in relation to offences committed on or after that date, provisions of the Crime and Courts Act 2013 were brought into force.

Schedule 16 to part 1 requires an element of punishment in all community orders so that an order must include at least one requirement imposed for the purpose of punishment, and/or impose a fine, unless there are exceptional circumstances, which relate to the offence or to the offender, which would make it unjust in all the circumstances.

Sentences may now be deferred for the use of restorative justice programmes and the £5,000 limit per offence on compensation orders in the magistrates’ court has been removed.

Further, in relation to breach proceedings, the option to take no action is removed and, if an order is allowed to continue, its terms must again be made more severe.

Although the act contains technical amendments to confirm that a community order and youth rehabilitation order is unavailable for aggravated offensive weapons and bladed articles (where sentence is fixed as a minimum custodial sentence), it is important to note that this is subject to section 305(4) of the Criminal Justice Act 2003, which confirms that such sentences may be passed if the ‘obligatory’ sentence is unjust in all the circumstances. 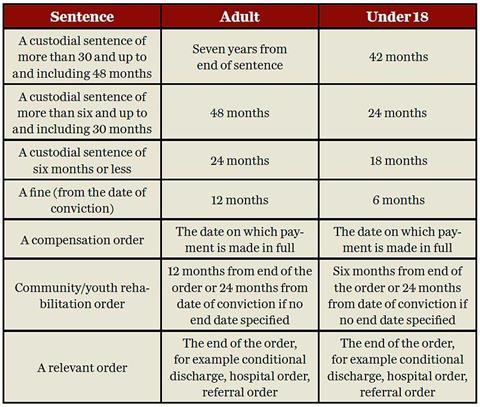 The first, for offences by those 18 and above sentenced on or after 1 April 2014, is in relation to sexual offences. There are appendices to the guideline of considerable value in explaining the many ancillary orders and other consequences on conviction, and to help deal accurately with historic offences.

The second, dealing with environmental offences, applies for all cases sentenced on or after 1 July 2014.

The third, for offences sentenced on or after 1 October 2014, is for fraud, bribery and money laundering by corporate offenders. Publication is made now to help with the negotiation of deferred prosecution agreements.

The most recent editions of the magistrates’ court guidelines make a significant change in relation to imposing disqualification in absence. Courts are advised to disqualify in absence if there is no reason to believe that the defendant is unaware of the proceedings and the statutory notices have been served. It is otherwise if there is evidence of an acceptable reason for absence, or where there is reason to believe that it is contrary to the interests of justice.

Tensions continue over the completion of case management forms. The Law Society has updated its guidance on rules.

5.5.1 Identifying the issues in a case

Both the Court of Appeal and the Divisional Court have emphasised the duty upon practitioners to identify the real issues in a case at an early stage. It has been held that to identify the issue does not offend the right of silence nor the privilege against self-incrimination. If a defendant refuses to do so, he can derive no advantage from this, nor ‘attempt an ambush at trial’.

5.5.2 Putting the prosecution to proof

The fundamental protection of the adversarial system of criminal trials is that the prosecution is required to prove its case against an accused person, and the Criminal Procedure Rules do not purport to change this.

However, the CPR stipulate that you must assist the court in the management of the case. The correct response to any conflict between these principles will depend on the nature of the information sought:

(a) There is an issue, or deficiency in the prosecution case, on which the defendant wishes to rely, but he or she does not wish to give the court advance notice of this. In this scenario, the CPR require that the defence must identify the issue, even if the technical defence is lost, or the deficiency is rectified because the prosecution is put on notice.

(b) The defendant is advised there is no defence in law, but states that he or she nevertheless intends to plead not guilty. In this scenario the defendant is entitled to put the prosecution to proof.

Guidance is given In R v Rochford [2010] EWCVA Crim 1928: ‘The [defence statement] must say that the defendant does not admit the offence or the relevant part of it as the case may be, and calls for the Crown to prove it. But it must also say that he advances no positive case because if he is going to advance a positive case that must appear in the [defence statement].’

In cases when an application for a representation order is determined on or after 27 January 2014, the power for a Crown court to make a defendant’s costs order is restored in favour of those who are not tried for an offence for which they were sent or transferred for trial, or who are acquitted at trial. The value of such orders is limited to the value of the claim at legal aid rates (Costs in Criminal Cases (General) (Amendment)(No 2) Regulations 2013 (2013/2830)). However, it is a pre-condition to obtaining such an order that the client applied for, and had been deemed ineligible for, legal aid (Costs in Criminal Cases (Legal Costs) (Exceptions) Regulations 2014 (SI 2014/130)).