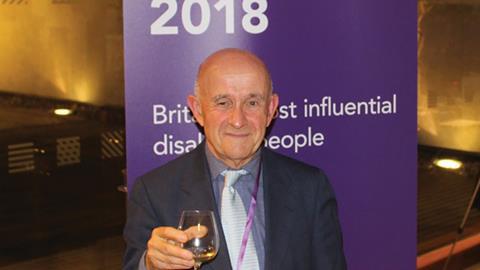 My childhood had a bearing on my taking up a legal career. At the age of 10, I was struck down by TB meningitis. I recovered but was left with motor disabilities and lost the majority of my sight. As well as learning to walk again, I also had to learn to read and write using steel-framed lenses. It was pretty grim but I always knew I wanted to help others in a similar position, and started voluntary work when I was a teenager in the late 1960s. The world then was not ‘disabled friendly’, and as I became older, my working circumstances became ever more challenging. Disability was simply not recognised. Maybe it was naive, but I thought I could help to change attitudes within the legal profession. I saw a definite gap, which was mirrored when the Lawyers with Disabilities Division was set up as a Law Society initiative.

A solicitors’ firm associated with my father’s employers said they would take me on – and I obtained articles with them. I had no visual aids and was expected to deliver the workload I was given and deal with challenging caseloads, including difficult and demanding clients.

The articles for clerkship, now the ‘training contract’, were quite different then. I had a place at the College of Law in Lancaster Gate, a Dickensian institution where we attended lectures taking hand-written notes. There were no computers and we were left to our own devices as to how we absorbed the law. With a combination of articles and the Law Society examination this led to admission to the roll in 1976. I then commenced 30 years in practice in the private sector and local government. The last years were dreadful and discriminatory; I was inundated with work with no aids or support. Eventually, I left and retrained as an accredited lecturer (in the mid-1990s). I have been working with a variety of agencies including local authorities, universities and the army ever since, providing training on how to present evidence, as well as on matters of the UK’s constitution.

With its Lawyers with Disabilities Division initiative, the Law Society recognised that disabled lawyers had potential that was being lost to employers. At the time, most major firms did not realise that disabled lawyers and those with special needs could be as good as their able-bodied peers. The Society started the division in 1989 and I was one of the first to sign up. Once we had a viable committee in place, we spread the word in the profession. The message was simple: firms had to be on board to meet disability need.

In the past, lawyers with disabilities were not helped to achieve anything like their potential. The big firms did not rate us, the middle-sized firms felt similarly, and it was hard work to make any headway.

Through my work with the Lawyers with Disabilities Division, I have mentored a large number of disabled students. One particular mentee, who was also a student at Exeter University where I studied, is completely blind. I told him to succeed in the law he would need nothing less than a 2:1. Four years later, I had the thrill of him calling to say he had gained his 2:1. At graduation, he came with his guide dog and the chancellor Lady Floella Benjamin embraced both of them. That was really rewarding, and I still mentor him.

The most memorable highlight of my career was probably my own admission to the profession. At the time I qualified in the 1970s, no one even dreamt of special adjustments. The only support I received was someone to take dictation during my exams and extra time.

I would like to see the legal profession make a number of changes to help lawyers with disabilities. I would like to see employers take on more disabled trainees and have a greater and continuing awareness of disability issues and be ready to provide support for disabled young solicitors. For example, voice recognition, specially adapted workstations and other forms of practical help need not cost a fortune.

My advice to law students or lawyers with disabilities at the start of their careers would be: think carefully about what area of law you want to specialise in; have a game plan and keep to it; be ready for setbacks; don’t be discouraged; and have faith in your abilities.