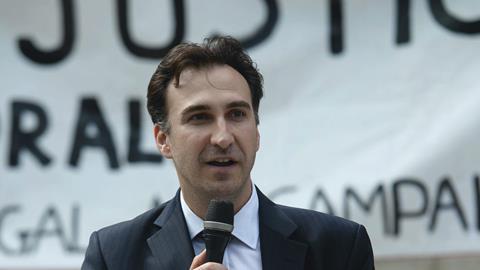 As a child, I always had a strong sense of what was right and wrong and from as far back as I can remember, I always wanted to enter the law. I was not particularly academic, though, and did not excel at school. Accordingly, a conventional university degree was never going to be a realistic option.

I got a job working in a law firm as an office junior and then embarked on a law degree via correspondence. I completed my LPC part-time after my degree. So, by the time I qualified, I had seven years’ full-time work experience.

As a criminal defence lawyer, whose practice is almost entirely reliant on legal aid funding, there have been many challenges, not least just making a living. But then we do not enter this area of law for big money.

Government reforms – some implemented and others abandoned over the years – have probably been the biggest challenge. I was privileged to have been a Criminal Law Solicitors’ Association committee member for two years when the fight (led by the CLSA) was at its fiercest. I thoroughly enjoyed my part in all of that and met some wonderful people. However, it was the years of uncertainty, the financial challenges and the cost to the justice system that I found most difficult to deal with. There were many occasions when I wanted to throw in the towel and make a career change. But here I still am!

As a criminal lawyer, we are judged by the rest of society for our part in helping the guilty walk free. The reality is nothing like that. I have met people in the depths of desperation – victims themselves – who are lost to society and the agencies intended to help them. So much of my work is to help people make the best possible decisions for themselves. Something like 98% of people accused of a crime plead guilty. I work with these people to rehabilitate them and to secure a punishment that serves to break the cycle of further offending. When I see that my little intervention in their lives has made for a brighter future, that is possibly the most rewarding aspect of this job.

I have learned of the suffering, neglect, disadvantage and prejudice that exists in our society and how it so often leads to crime. Yet I have also become aware of how easily a person’s life can be changed for the better, if only the right opportunities are afforded. For some time I wanted to be able to do more for the people who would otherwise so often end up as my clients. So I qualified as a counsellor/psychotherapist. Now I work as a volunteer mentor for Pure Insights, which supports young care leavers.

I feel strongly that a once great profession has been commoditised and forced to become a business, whereby profit matters over and above all else. However, I commend the manner in which the Ministry of Justice has embraced technology, which has revolutionised the way we work. Such advancements have mitigated the recent, rapid and drastic falling rates of pay.