Solicitor in the commercial department at Awdry Bailey & Douglas, Marlborough 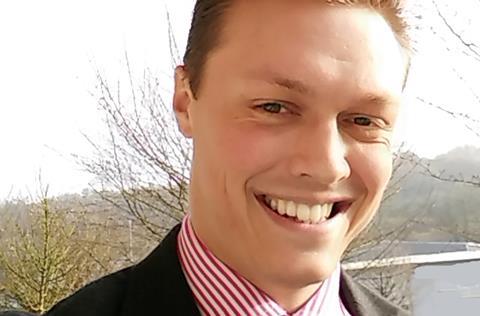 I have always had an interest in the legal profession. After studying law at A-level, I was sure that it was the career I wanted to pursue. Law is something which affects and governs everything that we do.

I followed a fairly conventional path into the legal profession. I went to university and undertook a law degree, then the Legal Practice Course, and afterwards completed a two-year training contract before qualifying. This was the most direct route into the profession, and the training was, at times, particularly intense.

I qualified at Awdry Bailey & Douglas, a firm with about 100 employees and four offices in the south-west, where I continue to work. My interest in commercial and business law began during the LPC. I became fascinated by the level of technical knowledge involved. I have found this to be particularly rewarding work, especially when working with SMEs, where there is generally a very personal connection with those involved.

I chose to return to university part-time to complete my Masters degree. Despite at this point having begun my training contract, I had a desire to continue investigating a number of academic points surrounding contract formation.

The project which I undertook focused on practical guidance for solicitors in respect of common commercial issues with the formation of contracts and the performance of obligations pre-formation. Undertaking this work has affected the approach that I take to my work and particularly the way that I address pre-contract negotiations.

There are several points in my career to date of which I am proud. But I feel that the overall highlights have been the work I have undertaken in several high-value company and commercial property transactions, including the sale of a high-value company in the metals and mining sector. I am proud of these owing largely to the trust which was placed in me by my clients, and the level of complexity which these matters involved.

Unscrupulous developers have significantly eroded the public’s confidence in leasehold properties due to the clear scope for abuse. Reform is certainly required

There are a number of challenges facing conveyancers at the moment. The prevalence of properties being sold on a leasehold basis, where this is not strictly necessary, features towards the top of this list. This has been widely reported of late, especially with regard to unscrupulous developers creating leasehold titles while retaining value in the freehold, enabling this also then to be retained or sold as an investment. This, and the consequent publicity, has significantly eroded the public’s confidence in leasehold properties due to the clear scope for abuse. Reform is certainly required to address this.

The government has identified some of the key issues surrounding the leasehold system. Two of the main points of focus in this consultation were on limiting the future sale of leasehold houses and placing limits on the increase of ground rents in leases with terms exceeding 21 years. Each issue can have a knock-on effect and create further issues, for example the possible risk of ground 8 possession orders being served on long leaseholders whose ground rent exceeds £250 (a risk which the government acknowledges). This would, for example, be addressed by the government’s proposal to limit ground rent increases (though measures would also be necessary and have also been proposed for existing leases).

The consultation also raised some important points relating to rights currently available to leaseholders, but not to freeholders. This concerns their ability to challenge service charges for maintenance of common areas. I feel this has been a difficult area for the consultation in a practical sense. Although it has been proposed that the Law of Property Act 1925 is amended to avoid the threat of possession (or lease assignment) by unpaid rentcharge owners, the amendment would effectively leave the rentcharge owner only with the option to pursue a claim which, in respect of many lower rentcharges, may be disproportionately expensive.

The ever-changing face of Stamp Duty Land Tax is again high on the list of current challenges. This has become a potential minefield for practitioners, especially since the implementation of the 3% surcharge in April 2016.