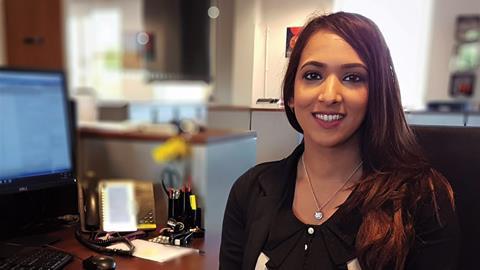 I knew that my mother’s prediction that I was going to be a solicitor was right, when my aspirations to be a lollipop lady fell through at the age of six. I was always inquisitive as a child and keen to know the details behind everything. My mother, no doubt fed up of daily cross-examinations, would say, ‘You are going to become a lawyer one day, I can tell.’ This framed my mindset to pursue a legal career, and with my family’s kind support and encouragement my legal career began.

I was called to the bar in 2010. I anticipated that the applications for pupillage would be a lengthy process and I did not wish to rush through this while undertaking my bar exams. I was also keen on earning some money after living the typical student life, and so I began working as a paralegal soon after completion of the Bar Vocational Course.

My employer, after training me to become a paralegal, had a different idea and was keen for me to undertake the route of a solicitor at his practice. He took the business decision, which I am now grateful for, to invest in me and paid for my QLTT exams, in order that I could cross-qualify as a solicitor.

I regularly undertake hearings, both by way of telephone and in person, on my own cases, so I do still get to enjoy participating in the advocacy element while in my practice as a solicitor. I hope to obtain higher rights of audience in the near future, so that I can then obtain rights to undertake trials.

I began my legal career in road traffic accidents in 2010. By 2014, I could foresee that the newly implemented fixed fees were going to heavily impact the RTA industry. I was unsure, at that early stage in my career, whether I could sustain a career solely on RTA cases. These concerns drove me to take the decision to enter into my firm’s industrial disease department.

I was glad I took this decision as the disease cases were more complex in comparison; they required more expert evidence and the claims were of a higher value. It certainly helped develop my skill set as a solicitor.

I regularly face the challenge of obtaining information on historical claims, such as noise-induced hearing loss. NIHL claims can date back as far as 1963, and sometimes the companies that are being pursued by the client are no longer trading. Elderly clients can struggle to recollect events due to the passage of time and sometimes defendant insurance companies no longer have access to documents for the companies being pursued in order to undertake their investigations.

These reforms are being debated by parliament and due to be implemented in 2019. The industrial disease fixed fees appear to be fair and proportionate to the stage of the claim, and the reasons for claims being able to exit the fixed-fee regime are also reasonable.

It means a lot to me when clients have really benefited in their lives from bringing their claims. I recently had a client who was the sole carer of his elderly father and shared a home with him. His father had passed away while my client’s claim was ongoing.

My client became concerned that he would not be able to pay the ‘bedroom tax’ and that as a result he would be evicted from his home. I was pleased when I secured settlement for him and at a good valuation, and my client was over the moon.

Fortunately my firm, Roberts Jackson, understands the significance of Ramadan for Muslims, as well as the struggles attached to fasting during a working day. Roberts Jackson offer various shift patterns to those who are fasting, in order to accommodate them.

During Ramadan, I work an 11am to 7pm shift, Monday to Friday, which permits me to be well rested after a late night of fasting and praying. This allows me to be more efficient during my day and enables me to offer the same level of professionalism and care to my clients throughout.

I also look forward to the Annual Eid Feast that we put on at Roberts Jackson to celebrate the end of fasting. There are certainly no empty stomachs on that day!