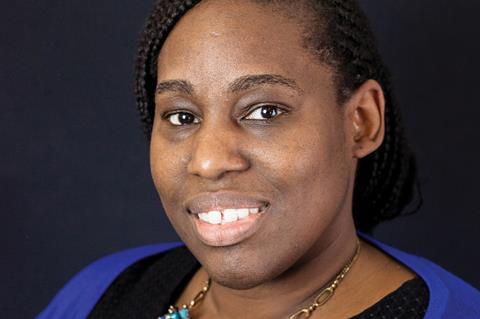 When I was 10 an assistant district attorney (think Crown prosecutor) visited my school. She was young, black and female – it was the first time I had seen someone that looked like me in such a position (other than Claire Huxtable on The Cosby Show). She told us that the work she was doing was making our community better and stronger. I instantly identified with her and decided that I was going to be a lawyer and work to make my community better. That desire never faded and keeps me going today.

My journey to qualification has been a little less than traditional. I obtained my LLB from Greenwich University, followed by my LPC at the College of Law. Unfortunately, as is the case for too many, I struggled to secure a training contract. While working as a paralegal/caseworker at HMRC, I studied for and passed the New York State Bar exam and was admitted as an attorney. A few years ago I sat the QLTS and was admitted as a solicitor of England and Wales.

I enjoyed my time working in government immensely. I learned so much, met and worked with amazing lawyers and was involved in some great cases. I started out as a court reporter in the immigration litigation team at the Treasury Solicitor’s (now the Government Legal Department) working mainly on judicial reviews. That was followed by a stint at HMRC Solicitor’s Office as a caseworker in the employment and commercial team working almost exclusively on national minimum wage cases. Shortly after being admitted to the NYS bar, an opportunity arose for me to return to TSol as a lawyer in the public inquiries team. I worked on an Iraq inquiry and was engaged in witness support. I later transferred to the Ministry of Justice private law team where I worked on a variety of matters, including false imprisonment claims and inquests.

An assistant district attorney visited my school. She was young, black and female – it was the first time I had seen someone that looked like me in such a position

The work I do at the Law Society is amazing – it is varied and challenging, and has real impact. Most recently I’ve worked to help prepare the profession for Brexit. I have been involved in advising on post-Brexit practice rights and business readiness. The work I get most excited about, however, is our strategic and representative litigation, especially our public interest work promoting access to justice and protecting the rule of law. The Society intervenes in cases where it can provide the court with submissions as the voice of the profession advocating fundamental rights and freedoms, and promoting the rule of law. For example, for the past four years the Society has been involved in a number of cases seeking to minimise the impact of LASPO.

As it turns out, I never practised in New York. Shortly after qualifying I attended a junior lawyer’s event hosted by the New York State Bar Association. All of the lawyers were working crazy hours and there did not seem to be any such thing as work-life balance. I love New York but I knew that life wasn’t for me, so I returned my attention to opportunities in London.

Qualifying as an attorney was an accomplishment of a lifelong dream. Since then, however, there have been a few other highlights, including of course qualifying as a solicitor. In 2018 I was recognised by Greenwich University as a notable alumna – seeing my portrait hanging in the library was surreal. My faith is very important to me and last summer I was able to marry my faith and profession as part of a delegation of lawyers (including a High Court judge) that travelled to Rwanda and Uganda with the Lawyers’ Christian Fellowship on a capacity-building mission. I delivered training on judicial review and client care, spoke about strategic litigation and facilitated a women in the law roundtable. It was a great experience.

I have faced many challenges in pursuing my legal career. A major barrier was a lack of financial support. There were times I worked multiple jobs while studying and I maintained a part-time job in retail up until I qualified as an attorney. Lack of finances also meant lack of opportunities – I couldn’t afford to do unpaid work experience. There were other challenges but I try not to focus on them. Every obstacle has made me who I am today.

Over the past 100 years the profession has made strides on gender equality in terms of numbers. More needs to be done, however, to support women into senior and leadership positions. As a black female lawyer, I would also like to see the dialogue broadened to include other characteristics.