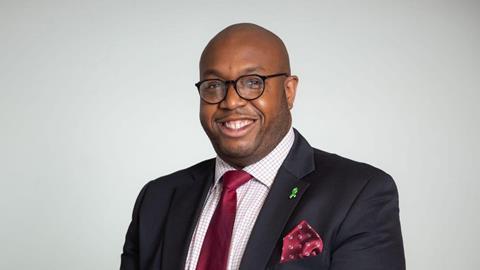 I have always had an interest in representing and giving a voice to those who, from a young age, are not heard. I was a youth MP at the UK Youth Parliament when I was 15 years old. I was always passionate about advocating on behalf of others. Lawyers like Courtenay Griffiths QC and Imran Khan QC inspired me to pursue a legal career.

My route into the law was difficult.  I graduated from De Montfort University with a 2:2 in law. This meant that many firms would not give me a chance because of my degree. It took me four years before I was able to get a foot in the door. In the four years between when I graduated and when I became a paralegal, I continued my work with the UK Youth Parliament – I was London region coordinator (after I had completed my LPC). This gave me life experience and skills that I have been able to carry into my career. Once I got into my first firm, I got a training contract within 10 months and qualified in 2012. Since then, I have practised in the field of mental health.

During my first seat in the training contract, a friend who had just got her contract went to a talk by the director of mental health of her firm. This sounded like an area of law I would be interested in because it would give me the opportunity to follow cases through from instructions to hearings. After a week of doing it in my second seat, I instantly fell in love with this area of law.

I represent clients who have been detained in hospital under the Mental Health Act 1983 (as amended by the 2007 act), and when their liberty has been restricted as a result of their mental health.

Clients will call me as I am an accredited mental health representative under the Law Society accreditation scheme. I will visit them in hospital, take their instruction, and represent them in applications to the Mental Health Tribunal which determine whether a person meets the criteria for detention under the act. When you are dealing with the most vulnerable people in society, because of their mental state their instructions can often change regularly. Sometimes, if care plans are not in place in the community, this can lead to delays in discharge.

The highlights of my career have been getting clients discharged from detention under the Mental Health Act. Also, leading my mental health team at Sternberg Reed has been memorable because I love training the next generation of mental health lawyers. Another highlight was when I got my client transferred from Broadmoor to a medium secure unit after he had been there for 22 years. I learned recently that he is now back in the community full-time.

The hardest case I came across was when I dealt with a 13-year-old who was suffering from paranoid schizophrenia. Every year, near her birthday, she would try to commit suicide. For three years, I heard from her mum about how she had been sectioned again. However, for the last four years she has lived without any issue.

I am part of the Commission for Equality in Mental Health. I would like to see changes in mental health law so it has more to do with provision for people in the community before and after they are sectioned. If more money were to be invested in health and social care, together with community mental health teams, this would prevent the continued use of the Mental Health Act, along with the rise in the number of people being sectioned.

I found it particularly challenging when trying to become a solicitor because of my degree result. Despite having good skills and experiences in other areas that were transferable, I found that I still could not get into a firm to train. Although the profession is more diverse than it has been before, I want to see more BAME lawyers in the highest positions in the judiciary as well as partners in law firms. More needs to be done to address the fact that the profession is still is regarded as an old boys’ network. If you are BAME, you have to work twice or even three times as hard to get recognition compared to our white counterparts. I feel that more needs to be done by the Law Society, the judiciary and firms to recognise the talent that they have at their disposal.