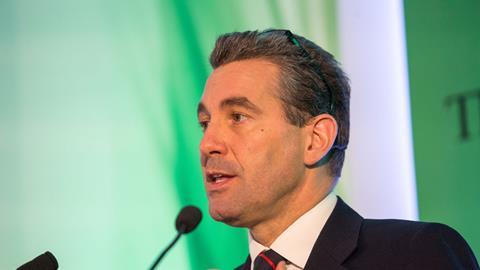 The chief executive of the Solicitors Regulation Authority today admitted that alternative business structures ‘haven’t worked’ as expected, urging solicitors to take advantage of recent rule changes enabling them to team up with accountants in ‘one-stop shop’ advisory firms.

Paul Philip (pictured) also pledged to forge ahead with moves to allow solicitors to provide legal services outside authorised law firms, though he indicated they would be subject to various practising restrictions.

Speaking to over 250 solicitors at this year’s Law Society Risk and Compliance conference, Philip noted that there are now around 450 ABSs.

But while stressing the SRA’s controversial ‘obligation to facilitate competition and foster innovation’ in the market it regulates, he added: ‘The intention of ABSs [sanctioned in 2011] was very much about creating professional services firms – allowing solicitors to get together with accountancy firms both on the high street and internationally, and enabling them to cross-sell and provide a "one-stop shop”.

‘I think it’s because of the SRA that ABSs haven’t worked. Our multidisciplinary rules still prohibited proper partnership between solicitors and other professionals, predominantly accountants.’

The biggest hurdle was the now-‘moribund’ separate business rule, which was relaxed last year, Philip said: ‘But there [are now] huge opportunities you should grasp for cross-selling into accountancy services and accessing the clients of accountants, and providing a one-stop shop. In terms of ABSs, I think the market will now change pretty quickly.’

Philip delivered an overview of the SRA’s work programme, which includes a commitment to radically prune the ‘inordinately bureaucratic’ 668-page Solicitors Handbook. Alluding to its commitment to ‘proportionate’ regulation, he observed that the regulator has shut down 172 firms in the past four years, a period over which the Compensation Fund has paid out £75m.

Only a ‘tiny proportion’ of the 10,500 complaints a year received by the SRA result in a substantive outcome, he said. But the organisation still needs to get better at ‘sorting the wheat from the chaff’ in detecting and sanctioning rogue solicitors.

‘We think solicitors should be able to provide legal advice outside an authorised entity, [but] certain things need to be in place. A solicitor in such a circumstance should not be allowed to conduct reserved activities; we need to consider the extent to which they will need professional indemnity insurance; they should not handle client money; and they should probably not have the benefit of legal professional privilege.

'A client would still need to go to an authorised entity for [privileged advice].’

Other consultations this year will include another attempt to cut the mandatory minimum cover of £2m for professional indemnity insurance, which the Legal Services Board refused to sanction in 2014. This time the consultation will be informed by 10 years of claims data analysed by the regulator.

Turning to key risks facing the sector, Philip pointed to the growing phenomenon of scams conducted through 'bogus firms’, reports of which numbered 800 last year, up from 700 in 2014; and cyber-security. He said the regulator is also determined to tackle a rise in ‘excessive, aggressive, or speculative’ litigation.

Ahead of a government consultation on formal separation of the regulator from its parent Law Society, Philip played down reports of growing friction with the representative body.

‘From reading the legal press you’d think we were at loggerheads,’ he said. ‘Quite frankly, that’s far from the truth. Though we have different views from time to time that’s the nature of the beast. In reality we continue to work in tandem.’