The role of lord chancellor is in danger of becoming 'decorative and ornamental' and the government will consider whether office-holders must be legally qualified, the current incumbent, Robert Buckland QC MP, revealed today.

Appearing before the Lords constitution committee, Buckland said he wanted to take a consultative approach to the government’s review of the Blair government's 2005 Constitutional Reform Act, which substantially changed the office of lord chancellor. As a result of the act, the lord chancellor is no longer the head of the judiciary. Since 2007 the office has been combined with that of the secretary of state for justice.

Buckland said today: ‘I want to take a somewhat different stance to the one that was taken then. I’ll be honest, with respect to those involved, I felt the process was rather rushed. It was sort of presaged by a press release about the abolition of the office of lord chancellor, which then had to be hastily withdrawn when those then in power realised the LC is mentioned about 500 times in different parts of statute. I want to avoid all of that.’ 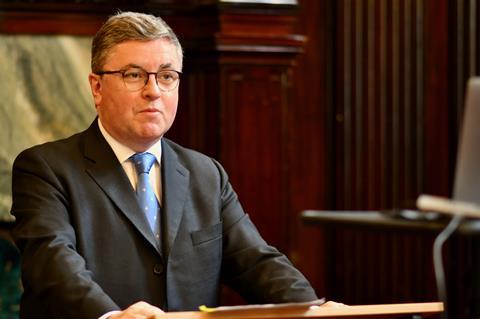 Buckland: Role of lord chancellor is in danger of becoming 'decorative and ornamental'

Asked how the lord chancellor role might change in practice, Buckland said: ‘There’s a lot of discussion about titles and names, Supreme Court, head of the judiciary. I think that is actually secondary to the underlying functional issues, which are far more important to me.

‘[The lord chancellor] is an historic role. There is a danger that if we proceed down the 2005 road, the role simply becomes decorative and ornamental. I think that would a terrible mistake.’

‘He or she is there to defend the judiciary, to make sure that their independence and status is absolutely maintained and upheld. But he or she can only do that if they have got real authority. Whilst I think I do enjoy that authority now, I think there are always ways that can be enhanced and improved to the benefit of the judiciary, executive and parliament.’

He added: ‘I believe in this office fundamentally. I want to make sure that after my time in office here, my successors will enjoy the confidence that their powers are clear, their relationship with all other branches of the constitution are as clear as possible. That’s why I want to do some work on this act.’

Buckland revealed that the ‘careful review’ of the 2005 act will include reviewing the status of lord chancellor and ‘whether there should be a qualification for that role’.