Lord chancellor Robert Buckland has declared that he hopes to stop would-be criminals in their tracks by making offenders do unpaid work handed down as part of their punishment in the full glare of the public.

Speaking at the Centre for Social Justice thinktank's headquarters on the criminal justice system, Buckland today described probation as ‘one of the most important ships in the justice fleet’.

He said: ‘Unpaid work will be the highly visible shopfront of our new Probation Service - because we want to make sure that justice in our country is done and seen to be done. There are literally millions of hours of unpaid work handed down to offenders as part of their sentence every year and we will make sure they are served more visibly - to help improve the environment in our towns, our cities, and our countryside. My hope is that this will not only clean up neighbourhoods but also act as a deterrent to would be criminals, making them fully aware that punishments will be served in the full gaze of their local communities.’ 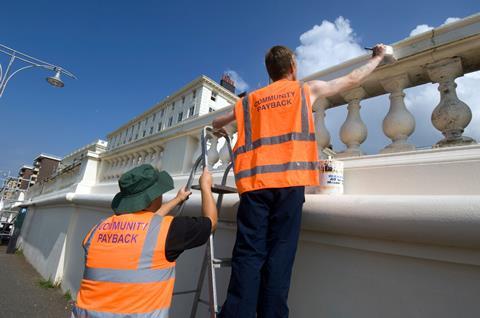 Buckland: 'Unpaid work will be the highly visible shopfront of our new Probation Service'

On prisons – ‘without doubt the largest ship in the criminal justice fleet’ – Buckland announced that he will publish a white paper setting out a new direction of reform.

Acknowledging that the controversial Police, Crime, Sentencing and Courts Bill will mean many prisoners spending more time in custody, Buckland said the white paper will include details on the government’s 10-year plan to create the ‘next generation’ of prison places as well as explore ‘resettlement passports’ to reduce reoffending.

During his 30-minute speech, the lord chancellor described rape and sexual assault as ‘some of the worst offences in our criminal framework’ and repeated his pledge to return the volume of cases reaching court to 2016 levels by the end of the current parliament.

Asked about the court backlog, he said he was confident that the magistrates’ courts would return to pre-Covid levels by the end of the year. Crown courts were ‘more of a challenge’ but stage 4 of the Covid-19 response would allow the courts to open more rooms.

Buckland also confirmed that the government is still working on problem-solving courts to deal with low-level offending.