Giving judicial powers to legal advisers in the county court has so far had a negligible effect on appeals against decisions, it has emerged. The Civil Procedure Rule Committee (CPRC) heard last week that 0.5% of the charge orders made under a pilot scheme have been reconsidered by a district judge. Of these, only three have led to a different order being made.

The pilot began in July 2017, allowing advisers – qualified barristers or solicitors – to hear claims started at the county court business centre and county court money claims centre. The scheme is part of a wider movement towards delegating judicial tasks, and in this case was designed to relieve pressure on district judges.

Feedback on the pilot was revealed at a public meeting of the CPRC, where members were asked to consider whether there was scope for making the scheme permanent.

Committee chair Lord Justice Coulson (pictured) was happy to laud the pilot but stopped short of approving the permanent adoption of legal advisers. 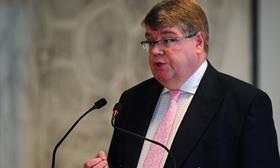 ‘One measure of the success of the pilot is that the number of cases which have led to a different order has been minuscule,’ he said. ‘I am of the view that is because not only have we had proper training but we have done it gradually.’

Members voted to continue with the pilot, with the issue likely to be back on the agenda in the autumn.

Practice direction 51Q sets out the limits of legal advisers’ work, which includes making an order to rectify a procedural error, granting an application to extend time for service of the claim form, and amending the particulars of claim.

Decisions of a legal adviser are made without a hearing, but a party can request that any decision be reconsidered by a district judge. That request must be filed within 14 days of the party being served with notice of the decision, and must include an explanation.

The Courts and Tribunals (Judiciary and Functions of Staff) Act, enacted in December, allows ‘appropriately qualified and experienced’ court and tribunal staff to deal with routine matters usually handled by judges.

Authorised staff can carry out tasks such as issuing a summons, taking a plea, extending time for applications, or considering applications for variations of directions made in private or public law cases.