Court 'walkouts' could start in weeks

The criminal justice system could come to a crippling halt in weeks as barristers decide whether to escalate action over legal aid by not turning up to court.

Since April hundreds of barristers have adopted ‘no returns’ in response to the government’s refusal to uplift their fees by 25% as well as other changes. They are now being asked whether they want to step up their action.

Over the weekend, the Criminal Bar Association opened a second ballot on whether and how to escalate the action, giving members three options to choose from.

The first option is to end the action. The second option is refusing to take on new cases under the advocates graduated fee scheme (AGFS) as well as not accepting returned cases. The third option is so-called 'days of action' for AGFS cases only. The action would apply to defence advocates and instructions.

If the majority of barristers opt for days of action, the court walkouts would start with two ‘days of action’ starting on Monday 27 June, escalating each week with an additional day, resulting in a five-day walkout on the week commencing Monday 18 July. 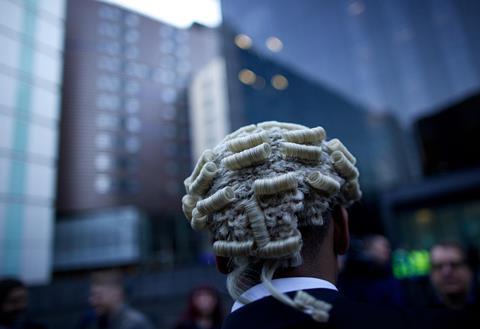 Hundreds of criminal barristers could refuse to attend court

The days of action would then be suspended for a week. The action would resume on 1 August with a full-week walkout and continue on alternating weeks subject to a satisfactory government response.

CBA chiefs consulted with members prior to opening the latest ballot, which closes on 19 June. The results will be announced the following day.

Association chief Jo Sidhu QC said: ‘From the consultations held across this week, it is clear that the Criminal Bar has no confidence that government is willing to deliver a fair and lasting solution to the crisis within our profession and within the criminal justice system without firm action that forces them to the negotiating table.

‘We take great pride in the fact that we are a truly democratic association. Our members have always respected the outcome of a free and fair voting process, whatever the result. We will therefore be faithful to the ballot. Our unity is our strength.’

Whether criminal defence solicitors step up their own legal action remains to be seen. Many practitioners are currently refusing to take on poorly-remunerated work, starting with burglary cases, but have called for tougher action.

The government’s consultation on a proposed £135m package of reform closed last week.

A Ministry of Justice spokesperson said: 'The Crown court backlog has fallen thanks to our decisive action and the hard work of legal professionals including criminal barristers, who as a result of our reforms will earn nearly £7,000 extra per year. This is a significant pay rise and we encourage the Criminal Bar Association to work with us, rather than continue or escalate unnecessary disruption in the courts which will only serve to delay justice for victims.'