Now is ‘Extinction Rebellion’ time for criminal defence work, a former chief magistrate has told solicitors in a no-holds-barred speech on the impact of cuts to the justice system.

Howard Riddle CBE, chief magistrate of England and Wales between 2010 and 2016, told the London Criminal Courts Solicitors' Association annual meeting last night that unless remuneration significantly increases, they will not attract the next generation of lawyers. ‘Who’s going to suffer from that?’ he asked. ‘It’s not going to be the guilty. It’s going to be the innocent.’

Riddle did articles at east London criminal defence firm Edward Fail Bradshaw & Waterson. He said he had much admiration for the bar ‘but that’s not where the real work is done. It’s done in the police station, interviewing witnesses and making sure they come to court. That’s where the miscarriage of justice is stopped often before they come to court’. 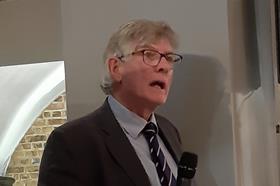 Riddle: innocent people will suffer if remuneration does not rise

Talking about the administration of justice, Riddle said ‘quality defence solicitors do not cost the state - you save it money’.

In the first few year after Riddle was appointed chief magistrate, he said the number of magistrates' courts halved, magistrate numbers dropped from 30,000 to 15,000 and the court budget fell in three years from about £1.3bn to around £800m. 'Funding fell by a third but the caseload stayed the same,' he said. 'Here's the thing. The system did not collapse. Between 2010 and 2016 trial delays were reduced. It could not have happened without defence solicitors co-operating with the Criminal Procedure Rules at the first hearing. Duty solicitors are disgracefully underpaid. You save the system far more than you cost.'

Recalling night sittings in London, Birmingham and Manchester in 2011 to deal with thousands of riot cases, Riddle said: 'There was criticism that the courts were too harsh. They were effective. Others recognised my work. You were not. No one recognised what you did but those courts could not operate 24 hours a day unless you went in at 3am.'

Going back to his 'Extinction Rebellion' declaration, Riddle said: 'If you cannot continue to recruit dedicated solicitors, where will the judges of the future come from? Who will defend and stand up for the innocent? Who will save the criminal justice system from unnecessary lengthy trials?'