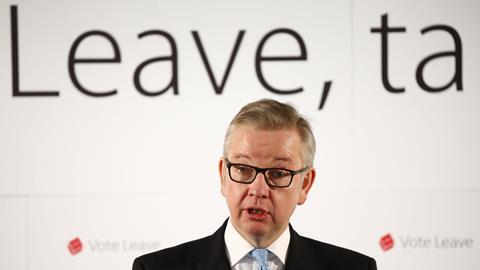 The spectre of the European Court of Justice (ECJ) assuming new powers over Britain's legal systems formed the centrepiece of lord chancellor Michael Gove's first speech as a leader of the Leave campaign in the EU referendum.

Gove (pictured) told a Vote Leave event in London today that the court 'does not see itself bound by anything other than a drive to deepen integration' and that it has 'consistently ignored and overruled any body which stands in its way'.

A vote to remain in the EU on 23 June would allow the EU to press ahead with plans for what he called the 'next great transfer of powers from EU members to EU institutions' as set out in the EU's Five Presidents report last year. This would include powers over 'the heart of our legal system so we are less able to safeguard the integrity of the contract and property law which is crucial to attracting global investors'.

The ECJ already has the perfect legal excuse to grab more power through the Charter of Fundamental Rights, Gove said, despite the UK's promised opt-out.

'The ECJ has now informed us that our opt-out was worthless and has started making judgments applying the charter to UK law,' he said. These include determining how intelligence agencies may monitor suspected terrorists.

Gove quoted former attorney general Dominic Grieve, a supporter of the 'In' campaign, as saying last year that 'the European Court of Justice in Luxembourg has predatory qualities to it that could be very inimical to some of our national practices'.

On the key referendum issue of immigration, Gove said that a post-Brexit government could replace Europe's 'open-door' migration policy with a point-based policy on Australian lines.

'We could emulate that country’s admirable record of taking in genuine refugees, giving a welcome to hard-working new citizens and building a successful multi-racial society without giving into people-smugglers, illegal migration or subversion of our borders.'

Meanwhile the Treasury yesterday said that the professional services would be among those hit if the UK voted to leave the EU. Its long-term economic analysis document, published by chancellor George Osborne, states that Brexit would reduce access to the European single market, making trade in this sector more difficult.

Conversely in the event of a remain vote: 'There would be substantial gains from further integration of services markets, and professional services in particular. As a first stage, a more ambitious implementation of the Services Directive would remove a significant number of barriers to trade in the sector.'