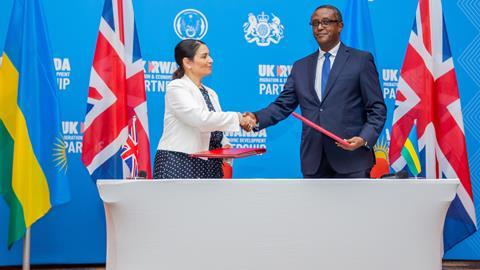 The Law Society has defended legal challenges to the Home Office’s controversial policy of removing asylum seekers to Rwanda, saying the courts could provide the first proper scrutiny on whether the initiative is lawful.

The High Court will tomorrow (Friday) hear an application from Detention Action, Care4Calais and the Public and Commercial Services Union for an injunction to stop the home secretary removing the first group of people next Tuesday under a ‘migration and economic development partnership’ with Rwanda.

Lawyers representing the claimants came under fire in some parts of the media for trying to block next Tuesday’s flight. However, the Law Society said the legal challenges raise questions about the foundations of British justice.

Society vice-president Lubna Shuja said: ‘Legal challenges are usually a safety net that ensure government is acting lawfully, following laws agreed by a democratic parliament. In this instance - where the arrangement has been brought in through executive action and hasn’t been examined in detail by parliament - the court may provide the first real scrutiny of the lawfulness of removing asylum-seekers to Rwanda.

‘Anyone at risk of such a life-changing order has a right to challenge its legality with the assistance of a lawyer. And the government could welcome this as an opportunity to check if the “initiative” is lawful.’

Shuja said it was unclear whether the policy is compatible with the UK’s commitments under the UN Refugee Convention, which states that asylum seekers should not be penalised for entering a country without prior permission or through an irregular route.

Chancery Lane said it is unsure on what legal basis certain people have been selected for removal to Rwanda. It is also concerned at reports from members that clients have not had adequate access to legal advice before receiving notice of the Home Office’s intention to remove them.

‘We also understand notices have been issued at such speed that it’s not clear if or how the Home Office could have properly considered the basis of each person’s claim and individual circumstances. For instance whether they may be a victim of torture and/or trafficking, have disabilities or other protected characteristics which might make their removal to Rwanda particularly unsafe,’ Shuja added.

A Home Office spokesperson said: ‘Our world-leading partnership with Rwanda is a key part of our strategy to overhaul the broken asylum system. We have been clear from the start that we expected legal challenges however we are determined to deliver this new partnership.

‘We have now issued formal directions to the first group of people due to be relocated to Rwanda later this month. This marks a critical step towards operationalising the policy, which fully complies with international and national law.’