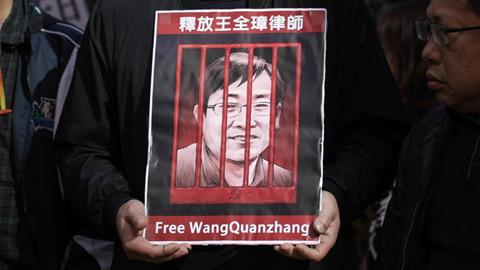 Freed Chinese lawyer plans to take on Beijing in court

Chinese human rights lawyer Wang Quanzhang, freed last month after four and a half years in prison, is seeking to challenge the Chinese courts over his conviction for state subversion. Wang was one of those held in a nationwide crackdown in July 2015. He was released on 5 April.

According to the Hong Kong English-language daily South China Morning Post, Wang has said he will petition to challenge his conviction, which he said violated the Criminal Procedure Law by denying him a legal defence. 'Procedural justice is what I have been desperately pursuing for years,' the newspaper reports him as saying. 'Now that an unjust case has landed upon me, I will show how it can be overturned in real life.'

The 44-year-old is known for representing causes that few other lawyers were prepared to take on, such as defending members of the outlawed Falun Gong religious sect.

His appeal is expected to result in a lengthy legal battle, the newspaper reports, and many observers remain sceptical about its prospects.

Although he was not one of the main targets of the 2015 crackdown, Wang’s refusal to plead guilty resulted in him being held in incommunicado for longer than anyone else. He was not put on trial until December 2018 and sentenced to four and a half years in prison after a closed-door hearing in the northern city of Tianjin.

According to Cheng Hai, Wang’s lawyer, his client had been denied access to at least five lawyers he appointed to represent him between 2015 and 2018. Cheng also said police and officials in Tianjin had blocked him from seeing his client and seeing case documents. ’This effectively left Wang sitting through two hearings without any lawyer. This in itself is illegal,’ Cheng said.