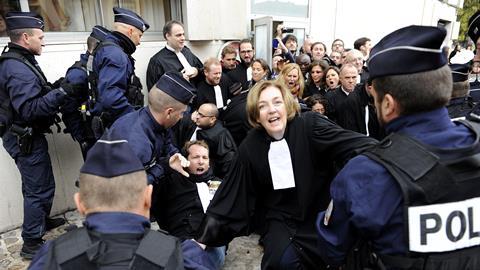 Protest action by French lawyers against planned legal aid reforms is heading towards a national profession-wide strike, the head of the Paris bar has warned.

Pierre-Olivier Sur, bâtonnier de Paris, was speaking after lawyers taking part in a 'robed protest' in Lille clashed with riot police outside a courtroom.

The dispute is over reforms to France's 43-year-old legal aid system approved by parliament on 15 October. They are due to come into effect on 1 January.

The justice minister, Christiane Taubira, has warned that, without reform, the 'breathless' system will 'implode within 10 years'. She said the reforms would bring 100,000 more people a year into the scope of 'l'aide juridictionnelle'.

However lawyers say the proposed changes would cut effective rates and require local bar associations to subsidise the system. 'We're being asked to finance a public service,' Sur said. 'It's as if we asked doctors to pay for social security or businesses to pay for national education.'

Meeting bar leaders at the French justice ministry today, Taubira said that the legal aid budget had grown from €275m in 2010 to €405m in 2016. Urgent reform is essential to ensure its sustainability, she said.

But in a television interview yesterday Sur predicted that the protests would continue. 'We are heading for a general strike across all our activities. There will be no employment tribunals, no divorces, no actions for damages. All will stop unless the authorities respond to our call.'