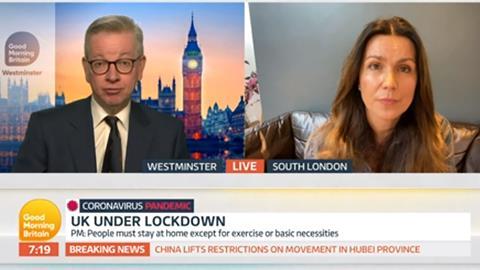 Children whose parents are separated can still travel to both homes, government guidance clearly states – after the Cabinet Office minister was forced to apologise for causing confusion following a TV interview this morning. One family solicitor said the clarification shows what a difficult topic it is and why confused parents are contacting lawyers in their droves.

Tougher measures were announced by prime minister Boris Johnson last night to slow down the spread of Covid-19. He said people can only leave home to shop for basic necessities, do one form of exercise a day, care for or help a vulnerable person, and travel to and from work if the work cannot be done from home.

Cabinet Office guidance states that children under 18 can travel between their separated parents’ homes.

However, Michael Gove, chancellor of the Duchy of Lancaster, caused confusion when he appeared on TV breakfast show Good Morning Britain today.

Asked what the new rules meant for separated families, he told presenter Susanna Reid: ‘Children should stay in the household that they are currently in. We should not be having children moving between households. I know this is incredibly difficult. This is an emotionally fraught time and a difficult one. Wherever possible, if there can be contact through social media or non-physical contact then that should carry on.’

Reid pointed out Cabinet Office guidance, which states that children under 18 can travel between their separated parents’ homes.

‘I would have thought that meant separated parents can move the children between two homes. Are you saying that that’s not what that note suggests?’ asked Reid.

Gove replied: ‘Yes. You should not be moving children from home to home.’

Following his interview, Gove apologised on Twitter. He said: ‘I wasn’t clear enough earlier, apologies. To confirm - while children should not normally be moving between households, we recognise that this may be necessary when children who are under 18 move between separated parents. This is permissible and has been made clear in the guidance.’

Jo Edwards, head of family at London firm Forsters, said she has been contacted by several parents whose ex-partners have effectively said that lockdown means no contact and that a child seeing the other parent is not 'essential'.

She said: 'In some cases a parent has moved to another area, without notice to the other parent, to be closer to family and this creates its own difficulties. We are trying to advise as sensitively and as best we can, where the picture is evolving and a lot of parents are genuinely worried about the child leaving one home at all.'

Edwards understands that the Ministry of Justice and the judiciary are hastily working on detailed guidance for separated parents. 'The reality is that many existing orders or agreements will have to be ripped up for the duration of this crisis; parents will have to be creative; and, if they cannot agree a new arrangement, ask for a mediator to assist e.g. via Zoom or, in extremis, for the courts to help,' she added.

Gillian Rivers, a partner at Pennington Manches Cooper, said that when Covid-19 reared its ugly head, her firm faced a sudden influx of refusal to permit previously agreed contact sessions. Rivers said judges are well aware of a parent who is 'cynically trying to manoeuvre themselves into the spotlight of their child`s eyes, putting the other parent into the shadows... I foresee any parent who believes they are outsmarting the wisdom of the family judges, by simply denying contact on the basis that they are self-isolating with the child, will be met by a robust judicial response, particularly if their denial of contact forms a pattern of historic hostility towards supporting an ongoing relationship with the other parent'.

She added: 'Whether the machinery of the courts will be strong enough to deal with the inevitable influx of enforcement applications for breach of contract remains to be seen. Although, anecdotal evidence of virtual hearings, both interim and final, is good.'