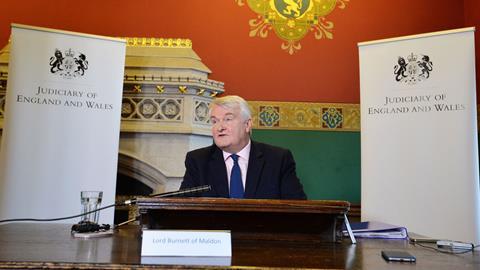 'Have confidence to speak up': whistleblowing policy for judges unveiled

The lord chief justice and senior president of tribunals want all judges to feel confident to speak up about any wrongdoing, according to a new whistleblowing policy unveiled this week.

The 12-page Judicial Whistleblowing Policy: How to report wrongdoing document was published on the judicial intranet on Wednesday.

The document says: ‘In introducing this policy, the LCJ and SPT want everyone to have the confidence to speak up, to be secure in the knowledge that it is safe and acceptable to do so, and to know that if you raise a concern under this policy you will not suffer any detriment.’

The policy concerns the reporting of wrongdoing ‘reasonably believed to be in the public interest’, such as a criminal offence or breach of any legal obligation. Complainants do not need to have proof of the wrongdoing. ‘Reasonable belief is sufficient,’ the policy states.

Personal conduct is not covered by the policy ‘unless amounting to wrongdoing that is reasonably believed to be in the public interest’. Judicial grievance policies cover formal and informal processes for raising concerns relating to harassment, bullying or discrimination.

Nominated judicial office holders have been appointed to act as a ‘confidential and impartial point of contact and information’ for office-holders raising a concern or complaint under the whistleblowing or grievance policies or for an office-holder who is the subject of a complaint.

The judiciary told the Gazette that 14 judicial office holders have been nominated and details are available on the judicial intranet.

Asked about the selection process, the judiciary said nominated judges were chosen based on expressions of interest. Applicants required endorsements from their leadership judge or magistrate. A selection panel reviewed applications to ensure representation from different jurisdictions, experience and background. Recommendations were made to the senior president of tribunals and lord chief justice.

The judiciary revealed in April that a new whistleblowing policy was in the works in its response to a shocking letter by eight, anonymous, serving judges who claimed colleagues had been ‘undermined, belittled or accused of being mentally unstable’ for raising concerns about a lack of diversity within the judiciary.

Former magistrate Penelope Gibbs, director of Transform Justice, welcomed the whistleblowing policy. ‘To make it work, the judiciary should change its culture so judges are prepared to whistle-blow on their colleagues. We also need a trusted and effective system whereby outsiders like lawyers can whistle-blow or complain about judges,’ she said.