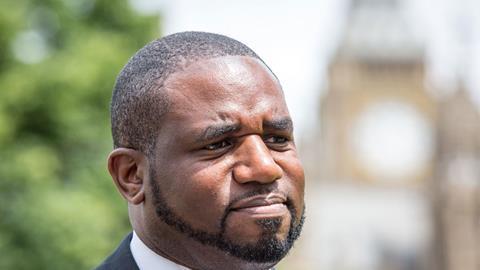 David Lammy, lawyer-turned-parliamentarian and author of proposals to create a more diverse judiciary, today criticised the government’s apparent failure to commit to steps he concluded were necessary for balance on the bench.

Former prime minister David Cameron commissioned Labour MP Lammy to study the justice system, and earlier this year Lammy put forward 35 recommendations to address what he described as the bias and overt discrimination faced by black and minority ethnic people.

The government today published its full response to Lammy’s report on race disparity in the criminal justice system later today.

Justice Secretary David Lidington insists the government will ‘take forward’ work around each of the 35 recommendations but acknowledged that some cannot be implemented in full or exactly as Lammy suggested.

Key proposals affecting the courts system, including targets for BAME judges and online reviews of judges, are effectively ruled out.

The MoJ said an online feedback system for how judges conduct cases would likely 'be used as a vehicle for dissatisfied parties to complain about the decision and would not be consistent with the principle of judicial independence’.

On targets for a more representative judiciary by 2025, the MoJ response said there is more to do on judicial diversity but that this was not the right approach.

It added: 'The requirement for judges to be qualified lawyers with many years’ legal experience, who are appointed on merit, means that many lawyers apply for judicial office later in their legal careers, resulting in an applicant pool that is less diverse than society as a whole.'

The MoJ agreed it should encourage more CPS and other government lawyers, where there is a more diverse pool of potential candidates, to apply for judicial office. It will also work with the National Bench Chairs' Forum, the Magistrates Association and others to review the attraction, recruitment, selection, welfare and development of magistrates to ensure a greater range of people applying for this role.

Lammy said he is ‘disappointed’ that ministers are not pushing ahead with targets for a more diverse judiciary.

The Tottenham MP said: ‘I found that the lack of diversity within our judiciary and magistracy has a significant effect on the trust deficit that I found in Britain’s BAME communities in relation to how the justice system is perceived. My review demonstrated the lack of progress over the last decade in improving diversity amongst the judges that sit in our courts, and I am clear that more of the same will not work.’

The Ministry of Justice says it has already made progress on several recommendations, for example by publishing data not previously released on race bias in the criminal justice system.

The department says academics, campaigners and think-tanks will have an open invitation to scrutinise data on race bias, and where the MoJ cannot explain discrepancies in the way different groups are treated it will make reforms to address them.

At his first press conference earlier this month, the lord chief justice, Lord Burnett of Maldon, said judicial diversity figures are 'rather better than those people would assume'. The percentage of people of minority ethnic background across society as a whole is 'not the right comparator', he said.

'You really need to look at the proportion of non-white people in the legal profession and perhaps more generally in the working population within the age cohorts where most judges sit.  So, 80 percent of judges are over the age of 50, for example, and in that age group only nine percent of the working population is from an ethnic minority and the proportions are much lower for those over 60, for example, when many of the very senior judiciary sit in age terms.

'So, the figures are perhaps rather better than those people would assume and what is so encouraging is that when one looks at the age profile of the judiciary, the younger the cohort of judges, the greater the proportion of both women and ethnic minority representation.'