Shadow justice secretary David Lammy would go further with his landmark race review if it was published today, he said last night, telling legal aid lawyers that the disproportionate representation of black, Asian and minority ethnic people in the criminal justice system has got worse.

The government-commissioned Lammy Review, published in September 2017, found that BAME defendants had so little faith in the criminal justice system that they did not even trust legal aid solicitors.

During an ‘In conversation with’ event at the Legal Aid Practitioners Group annual conference yesterday, journalist Fiona Bawdon asked the Tottenham MP what role defence solicitors can play in addressing the trust deficit.

Lammy replied that ‘the fundamental trust issue begins with contact with the police’.

On stop and search, he said: ‘It is very hard to be a black Londoner and make it to 23 without being stopped and searched. I have been stopped and searched on numerous occasions. If you’re innocent, you’re not doing anything wrong, but you’re told to put your hands up in public, you start to lose trust in the police. One of my boys was stopped and searched for the first time just a few weeks ago. That’s where it sets in.’

Lammy told the conference that when people from ethnic minorities arrive in England, trust levels are high compared to trust levels in the country they came from. With subsequent generations, the trust diminishes.

Last year Lammy told the prime minister that when he completed his review, 41% of the children in prison were BAME in a country where these groups make up only 14% of the population. The figure had since risen to 51%. In London, 90% of young people on remand are from a BAME background. 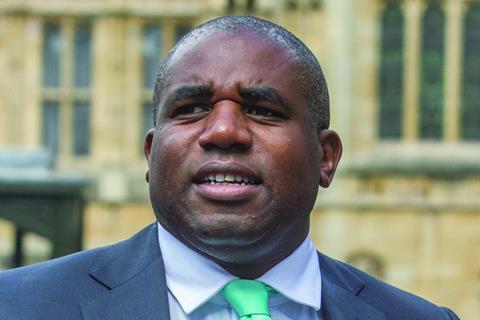 Lammy: disproportionality in criminal justice system has got worse

Lammy said yesterday: ‘I get so upset about my review because it has got worse, not better, since doing the review. The recommendations have not been fully implemented. If I was publishing the review today, I would go further than when I was commissioned to do the review five years ago.’

The shadow justice secretary was asked about an incident last year when barrister Alexandra Wilson was repeatedly mistaken for a defendant in court.

Lammy, who was called to the bar in 1994, said: ‘On one level it was fully depressing that not much has changed. I remember that experience myself as a young lawyer. I remember it as a young MP in a way.

‘At the same time, it’s probably true to say, if you look at the proportion of ethnic minority and black people at the bar, it has gone up. It does look good. It’s why it’s really concerning that we have been so slow and so poor to appoint BAME judges and get a judiciary that is representative of the country. People are applying but they’re not getting through.’

Lammy has often criticised the lack of judicial diversity when talking about his review at past events.

Official statistics show that across all judicial recruitment exercises in 2019-2020, 1,849 applicants identified as BAME, but only 101 were recommended for appointment.