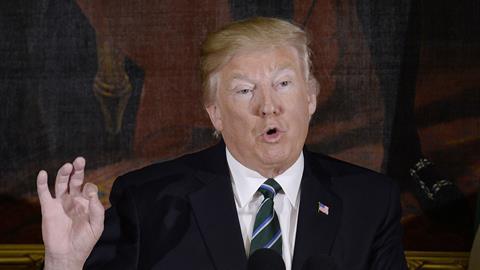 Lawyers in the US have vowed to fight president Donald Trump’s decision to pull funding from the key source of federal legal aid in the country.

Plans to remove funding altogether for the Legal Services Corporation (LSC) appear in Trump’s first budget released to the public this week.

The agency, the single largest funder of civil legal aid for low-income Americans, received around £311m in 2016 and says it needs more than £400m this year. More than 90% of its funding is distributed to 133 independent non-profit legal aid programmes employing more than 800 people.

LSC leaders have expressed confidence that Congress will continue to support the service with bipartisan support.

‘The LSC is as American as apple pie,’ said John Levi, chairman of the LSC board.

‘We promote what Thomas Jefferson described as "the most sacred of the duties of government", which is to provide equal and impartial justice to all its citizens. And we do it at a cost that amounts to less than one one-hundredth of one percent of the federal budget.’

The American Bar Association said more than 30 studies have shown that legal aid delivers more in long-term benefits than it costs. It vowed to lobby Congress to ensure adequate funding is still provided.

The ABA added: ‘The American Bar Association is outraged that the administration proposes to eliminate funding for the LSC in its budget and calls on every member of Congress to restore full funding.

‘LSC provides civil legal aid to people who desperately need help to navigate the legal process. Without this assistance, court house doors will slam in the faces of millions of Americans, denying them equal access to justice.’