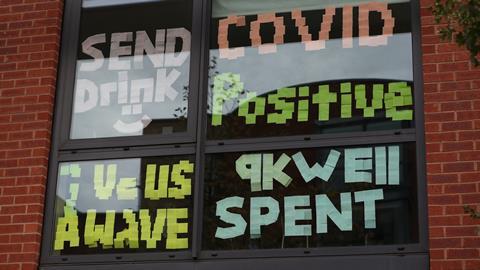 Lawyers step in as Manchester students locked down

Students confined to their halls by a coronavirus outbreak have been offered pro bono help as their legal rights come under the microscope.

It was reported over the weekend that police and security staff were stationed outside two Manchester Metropolitan University accommodation blocks after students were told to stay in their rooms for 14 days. The instruction came after 127 students tested positive for Covid-19.

The enforced lockdown raised questions about the legality of keeping students confined to their halls, with some lawyers on social media suggesting they were effectively under house arrest.

Kirsty Brimelow QC of Doughty Street Chambers said that if students were not allowed to leave their accommodation then they could look at legal action against the university and Manchester City Council.

On Sunday, in a post with more than 2,000 likes, Liverpool firm Levins Solicitors tweeted: ‘To the MMU students at Birley campus and Cambridge halls: get in touch and we will do our best to help, pro bono.’

The firm said it was writing to the university and the council on behalf of MMU students to seek clarification, adding: ‘Students were told that they MUST self-isolate and that breaches would be punished by disciplinary action. It appears that MMU now accepts that it had no right to enforce these measures.’

There was a further legal row over the weekend as it emerged that students had been ordered to take down signs they had displayed in their windows, including one which spelt: ‘HMP MMU’.

The university apologised yesterday for the message sent about posters in windows, saying they students had the right to protest about their situation.

In a statement yesterday, the university said: ‘Following discussions with Public Health England and Manchester City Council on Friday, the decision was taken to ask students living in the Birley and Cambridge Halls to self-isolate at short notice.

‘The reason for this was the rise in the number of COVID-19 cases, with 127 students testing positive for the virus, and the need to protect our wider community.’