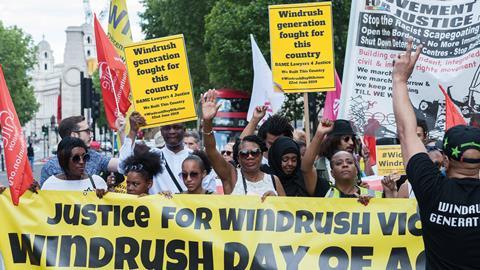 Legal aid for Windrush victims 'would save taxpayer money'

Making legal aid available to victims of the Windrush immigration scandal would save Home Office staff a substantial amount of time and cost, an influential legal thinktank said today.

Funding legal representation for claimants is one of 27 recommendations made in the latest report of Justice to improve the administrative and procedural aspects of the Windrush Compensation Scheme to make it accessible, fair and efficient.

The National Audit Office found that, on average, it takes 154 hours to process a case through to payment approval, considerably longer than the Home Office’s original estimate of 30 staff hours.

Justice says funding legal representation for eligible claimants would substantially reduce the length of time necessary for a caseworker to review a claim, which in turn would reduce the costs of initial determinations and appeals.

The NAO’s analysis showed that half of the cases subject to a quality assurance check needed to be returned to a caseworker for further work, indicating that cases often contained errors.

Justice says direct engagement between the caseworker and legal representative can easily clear up outstanding questions, reduce errors and maximise the chances of getting the determination right the first time.

The Home Office said the compensation scheme was designed so that people should not need to seek help from lawyers. For those who want support, the department funds a claim assistance provider.

However, Justice highlights concerns over the scope of support provided. It says the time allocated to claimants is insufficient, that all writing must be done by the claimant personally, support generally ceases following submission of the claim, and the nature of the services provided exclude advice on the merits and substance of an application. A survey of lawyers providing support to claimants found that most cases required more than 20 hours of work.

Justice’s working group was supported by City firm Dechert. Group member Dechert partner Tim Bowden said: ‘Through this working group and Dechert’s own pro bono casework supporting Windrush claimants, in collaboration with the Joint Council for the Welfare of Immigrants and six other law firms, we have seen first-hand the challenges faced by individuals seeking redress. This report makes practical proposals which are readily implementable, and we hope it will lead to significant changes in the scheme to ensure that claimants are fully and fairly compensated.’

A Home Office spokesperson said: 'The home secretary has been resolute in her determination to ensure everyone affected by the Windrush scandal receives the full compensation to which they are entitled. We are pleased that this report welcomes the significant improvements we have made to the scheme, including its overhaul last December. Since then the amount of compensation paid has risen from less than £3m to over £31.6mwith a further £5.6, having been offered.

'Many of the issues raised in this report are already being addressed and several recommendations have previously been considered. For example, we continue to firmly believe that moving the operation of the scheme out of the Home Office would risk significantly delaying vital payments to those affected. However, we are always open to making further improvements and will reflect carefully on the report’s findings.'