The oversight regulator has issued its first public censure after finding that the Law Society broke its internal governance rules between 2014 and 2017.

Following a 16-month investigation into the period from autumn 2014 to February 2017, the Legal Services Board found the Society’s arrangements for oversight and monitoring of the Solicitors Regulation Authority were not transparent or proportionate, thereby impairing the effectiveness of the SRA.

But the LSB found no evidence that the SRA’s independence had been impaired, nor that any solicitor or client was adversely affected.

In a 102-page report published this morning, the oversight regulator acknowledges that changes were made last year and that the SRA is now responsible for designing and managing the process for appointing its own board members.

The LSB declined to issue any monetary penalty against the Society, and instead has asked it to update what further improvements have been made by this autumn.

In its response, the Society said talks have been open since 2016 to address issues raised and significant changes to its governance arrangements have already been made. 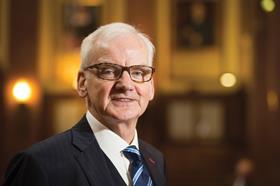 Joe Egan, Law Society president, said: ‘The LSB report published today is a commentary on the situation before our governance changes were implemented in 2017. We are pleased that the report did not find that our historic governance arrangements had infringed regulatory independence, but we are disappointed that they felt the need to censure us when we have collaboratively tackled the issues they raised.

‘We have undertaken voluntarily to report to the LSB on how our new arrangements are working. The changes to our governance are part of the ongoing reforms of the Law Society as we work every day to become even more relevant to members, working in the public interest.’

The investigation was in relation to how the approved regulator, The Law Society, interacts with its independent regulatory arm, the SRA. It found that, during the years in question, the Society’s oversight bodies had an 'overlap and ambiguity’ resulting in duplication and lack of clarity on accountability.

The Society’s general regulations, which set out the arrangements for monitoring and overseeing the SRA, were incomplete and out of date, the LSB reported, while the investigation found a lack of shared understanding between the Society and SRA as to what oversight bodies should do.

The SRA was not found to be responsible, as it should have been, for designing and managing the appointments process for its board members.

However the LSB did not find the SRA’s independent performance of its regulatory functions was impaired.

LSB interim chair Dr Helen Phillips said: ‘The complexity, ambiguity and burdensome nature of TLS’s monitoring and oversight arrangements for the SRA were unacceptable. Its actions have impaired the effectiveness of the SRA, thereby undermining the public interest in effective regulation of legal services.’

She acknowledged that the Society acted in October 2017 to reform the SRA appointments process.

Paul Philip, SRA chief executive, said: 'The LSB launched this review over a year ago and the Law Society has now made improvements to the way it operates. We are committed to working together constructively. We understand the current legislative constraints but know there is more that can be done within the existing framework to ensure that the SRA is as independent as possible. We have already proposed that the SRA should be established as a separate legal entity within the Law Society Group, as an interim measure.'