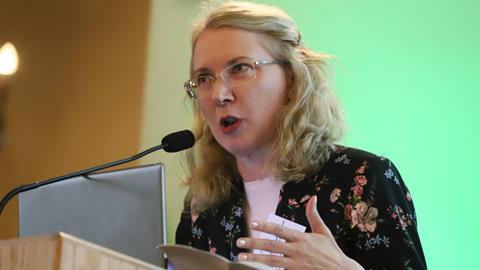 A complete re-draft of the rules governing damages-based agreements (DBAs) was published yesterday, with lawyers urged to give feedback on the proposals.

The proposed new Damages-based Agreements Regulations 2019 would move to a ‘success fee model’ of DBA, would allow ‘hybrid’ agreements, contain specific termination provisions, and expressly allow for defendants to use DBAs.

The new regulations were drawn up by Professor Rachael Mulheron of Queen Mary University and costs barrister Nicholas Bacon QC, following an independent review of the current DBA rules which they carried out at the request of the Ministry of Justice. The existing regulations, introduced in 2013, have proved unpopular with the profession, with very little takeup of DBAs.

Speaking at the Law Society’s Commercial Litigation conference yesterday, Mulheron (pictured above) said the re-drafted rules were ‘by no means the last word’ on the issue, as they must still be submitted to the MoJ and would have to be introduced via statutory instrument, with further consultation. But she said the plans should ‘move [DBAs] forward in a way that is workable’.

Mulheron added that this meant the level of the DBA cap needed to reduce, to avoid ‘overcompensation’. She said the current suggestion was for the DBA cap in commercial claims to be reduced from the current 50% down to 40%, and in personal injury, from 25% down to 20%. ‘It will be a question of getting feedback from those who engage with the reform project as to what the appropriate caps would be,’ said Mulheron.

On hybrid DBAs, she said that without the hybrid option, it was difficult for solicitors to fund long-running commercial disputes on a DBA. She added: ’The conditions on which a hybrid DBA is permitted, and what will be recoverable as a cap in the event that the claim does not succeed, are set out in the [draft] regulations.’

In relation to the termination of DBAs, she noted that solicitors were concerned by the current regulations because ‘it was always a risk that solicitors would take a matter right through, and then just before the judgment, the DBA could be terminated - and the solicitor would be literally unable to claim.’

She continued: ‘So specific termination provisions have been provided for… but we are happy to get feedback on the terminology.’

The re-drafted regulations can be found here and the deadline for feedback is 15 November.

Meanwhile, Professor Mulheron is also monitoring the disclosure pilot in the Business and Property Courts which began in January. She invited lawyers who have experienced the pilot to give feedback via a questionnaire by 15 November.